Don't Quit on Me Now


For today's workout, the original plan was to go to the gym and lift for legs and then do 40 minutes of steady state cardio on the treadmill. However, all the treadmills were being used so we decided it would be a good idea to just head home and run outside. Not only was it nice out, but it would be better training for next weekend's 5K that Melissa, Eric and I are running in Mt. Pleasant.


There's a loop that circles our apartment complex and the surrounding neighborhood and it's exactly 1.5 miles long from start to finish. FYI, this loop is NOT flat. It's actually more like half uphill and half downhill. Usually when I run outside I run the loop once and call it a day because I'm totally winded. However, Jillian (aka Eric) decided that today we would be running it twice.


Now, it's not like I've never run three miles before. I've done it on a treadmill quite a few times and I've ran five 5Ks, but as I mentioned in my Top 10 of 2010 post, I have only run one of those without stopping to walk at all. There's something about running outside (and in today's case in cold snow) that just makes running so. much. harder. However, I knew that Jillian would be pushing me today, and I was ready.


The first loop went well; I was feeling tired by the end but that's because it ends after going up a hill. I kept pushing though and started on the second loop. However, right around the two mile mark is when things started getting really tough. This is usually where I stop and take a walking break when I'm by myself, but today I had Jillian right behind me. I tried to stop about 5 times on that second loop, but everytime I did Eric would grab me and make me start running again, not letting me quit. He reminded me how I was doing so well, was getting so close, and told me not to let him or myself down.


I hate admiting that I can't push myself as hard when I'm by myself, but it's the truth. I wish I was as hardcore as everyone thinks I am, but honestly I am really quite easy on myself. I need to learn to work through the pain, and having someone right there pushing me and not letting me stop really makes all the difference in the world. Even though I may whine and complain a little a lot, I really do appreciate everything that Eric has done for me on this journey, and I am determined to finish what I started two years ago.


I pretty much collapsed when we walked in the door after the run. Next Saturday is going to be brutal.


So, yesterday I promised you guys an official weigh in. Here ya go: 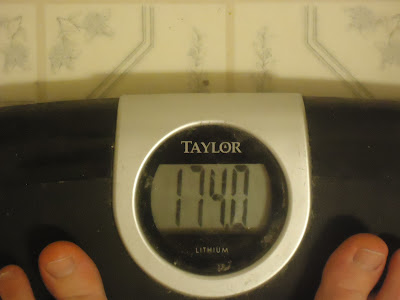 ﻿
Before I left for winter break, I was at 169.0. That's a total gain of 5 lbs over the last 3.5 weeks or so. However, if I keep up with these intense workouts and keep my diet clean, I have no doubts that the Christmas weight is just going to fall off. Hopefully, it'll take an extra 35 lbs with it :)
I decided that I am going to start posting weekly updates of my weight for you guys. I know today is Saturday, but Wednesdays are going to be the official weigh in days. I've always liked those days; they are right in the middle of the week so if I have a bad weekend, I have a couple days to try and make up for it ;)
This morning, I couldn't wait to bust into this for breakfast: 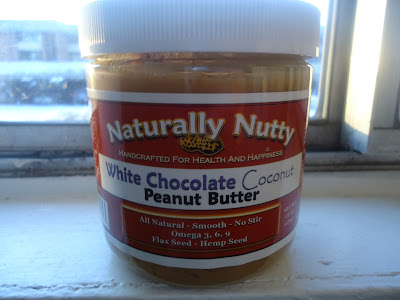 ﻿
I had a yummy bowl of oatmeal with 1/3 c oats, 2/3 c almond milk, dried cherries, walnuts, cinnamon, and about 1 T of this peanut butter. I am kind of obsessed with putting peanut/almond/sunflower/any kind of nut butter in my oatmeal now after reading it on a bunch of blogs. I don't think I could oatmeal without it now. De. Lish.
I'm off to get showered and cleaned up and then I've got errands to run. Tonight I'm going out for dinner and dranks with the Standale Meijer Pharmacy crew. Should be a good time :)
Have a great day everyone!
Posted by Krista at 2:04 PM