One of the things that I have struggled with for a long time is emotional eating. According to Mayo Clinic, emotional eating is defined as "eating as a way to suppress or soothe negative emotions." These include:

Last night, I was the most stressed I have been in a while. I had a busy day at work and the entire time I was there, I kept thinking about all of the studying I was going to have to do when I got home. When I walked in the door at about 4:45, I headed straight for the refrigerator. I wasn't even that hungry; I had eaten a filling lunch at about 12:30 and had an afternoon snack as well. Regardless, after gobbling down a few pieces of turkey jerky, I plopped on the couch and discovered Eric's bag of Doritos under the coffee table. Without even thinking about it, I started digging in.


I had only eaten a few chips before I realized what I was doing, and I immediately stopped and reminded myself that it wasn't worth it.


Five minutes later, I popped a frozen pizza in the oven.


Thirty minutes later, I had devoured half of it.


It may have been an Amy's Organic Spinach pizza, but I still could have exercised a little more self-control. Throughout the course of the rest of the night, I consumed half of a chocolate bar, two handfuls of white chocolate chips, a fruit strip, another slice of pizza, and a couple crackers with cashew butter.


In the past, I have let stress (and other types of emotional) eating undermine my weight loss efforts, and Mayo Clinic sums the reason up nicely:


"Whatever emotions drive you to overeat, the end result is often the same. The emotions return, and you may also now bear the additional burden of guilt about setting back your weight-loss goal. This can also lead to an unhealthy cycle — your emotions trigger you to overeat, you beat yourself up for getting off your weight-loss track, you feel badly, and you overeat again."
﻿This is often the reason why many people, myself included, fall off the bandwagon in their journey to lose weight. Once you screw up on your diet once, it becomes easier to do it again, and before you know it you're back to your old habits and you've gained back all of your weight plus more. That being said, these are the two most important lessons that I have learned when it comes to dealing with emotional eating:
Last night I had a hard time finding other ways to deal with my urge to stress eat. I didn't have time to go to the gym since I had too much material to go through and the more I studied, the more I thought about eating. Do I think that's normal? Probably not. While I definately don't think it's "normal" to have to work this hard to resist the urge to eat when you're not hungry, I also don't think it's uncommon. I think that anyone who has ever struggled with their weight, suffered from an eating disorder, or has gone through pharmacy school (ha) has faced emotional eating before, but some people are just better as resisting temptation than others.
While I ended up eating more than I would have liked last night, I didn't go out and buy a pint of Ben and Jerry's, or eat an entire large package of Twizzler's like I have in the past while on emotional binges. I didn't feel guilty this morning when I woke up, I fixed myself a healthy breakfast and ate like I normally do the entire day. After my exam (which went well, by the way), I went to the gym and ran a 5K on the treadmill with Eric. While I am far from perfect, I have definately made a lot of progress with my emotional eating struggles and I'm proud of myself for that. I truely believe that anyone can overcome the battle of emotional eating if you work hard enough and focus on your goals. 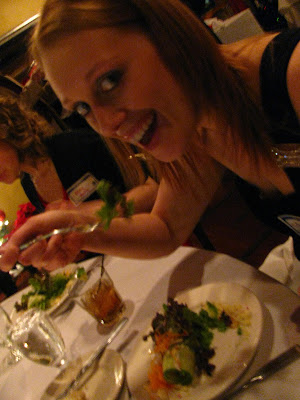 Kind of like how I know Eric is going to win whatever battle he's fighting in Halo right now, because I know he won't put down that controller without giving it his all ;) 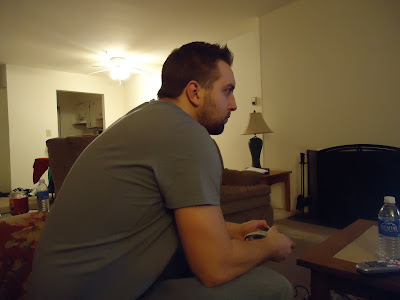 Has emotional eating ever gotten in the way of your weight loss or other health-related goals? What do you do to overcome it?
Posted by Krista at 8:19 PM