It's not something I'm proud of, but I am definately one of those only religious on Christmas/Easter/when I need something or I'm sad kind of people. I do consider myself a Christian, but I'm not exactly a regular church-goer. Therefore, every year when the season of Lent rolls around, I always find myself feeling a little awkward thinking about what I want to "give up." You see, here's another thing you might not have known about me: I love to jump on the bandwagon. If everyone else is doing something, I've just got to do it too.


Regardless of the fact I really don't know that much at all about Lent, I still continued to think about the various things, and by things I mean food, that I loved that I could potentially survive without for forty days. A few years ago I gave up Mountain Dew, the next year I gave up Taco Bell (and I wondered how I got so fat?) and this year I decided on fried food. However, two days after Lent began, I realized that fried food would be too easy (since I don't eat it that often) and changed my mind. I announced via Twitter that I was giving up nut butters for Lent.


Not even two minutes after tweeting, I received a phone call from a slightly annoyed Eric. He told me that I can't just "change my mind" and that Lent had already started. I replied and explained to him I wasn't really doing it for Lent, but more because I thought it would help with my weight loss (I sort of have an obsession with peanut butter). We sort of ended the call on a "let's just forget about it" note, since I was on my way back to Grand Rapids anyways.


When I got back, we had a little chat about why he sounded irritated over the phone. He wasn't actually mad because he knew that I wasn't trying to be rude, but my tweet had sort of offended him. He prides himself in his religious beliefs and takes the purpose of Lent of very seriously. Here he was, trying to use this time to get closer to the Lord, while I was practically (unintentionally of course) making a mockery of it by using Lent as an excuse to give up one my favorite foods for no reason other than the fact that I want to lose weight.


So, let's get to the point of this long on-a-more-serious-note post. I'm sorry if anyone read my tweet and was offended or annoyed by it. I will no longer be "giving things up" for Lent because I respect the seriousness of the holiday and I respect those who participate in this religious tradition.


On that note, I am still giving up nut butters for the time being, but I want to make it clear that I am not doing it for Lent. I am doing it because I have a crazy love affair obession with them (although apparently that is not entirely unheard of in the blogworld) and as much as I have tried to limit myself to one serving a day, I just don't have the self control to do that. Therefore, I have sadly handed over my stash (five jars to be exact) of nut butters to Eric for safe keeping. I will be allowed access one day a week until I decide that enough time has passed. Or I lose 35 more pounds. Any bets on what will happen first? ;)


Ok, now that that's out of the way, check out my fabulous spinach and mushroom omelette that I whipped up for breakfast: 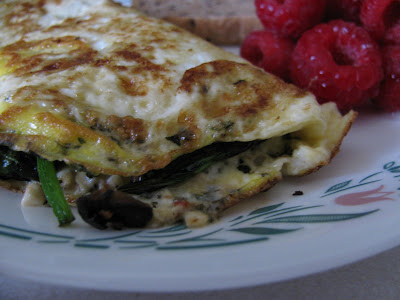 I sprinkled some onion flakes on the mushrooms and sauteed them in a little EVOO until they were brown. Then I added the spinach and cooked it until it wilted. I whisked the eggs/whites in a bowl and then poured them in a pan and proceeded with the typical omelette making process (I always season my eggs with salt & peppa, basil, parsley and cilantro). When the eggs were just about cooked, I added the cheese, mushrooms, and spinach to one side, folded it and let it cook for about 30 more seconds. BAM! 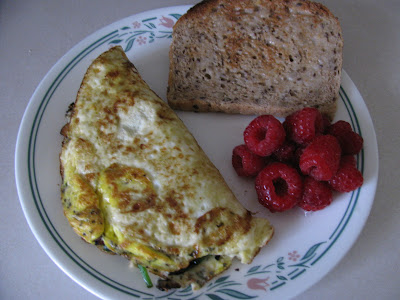 275 calories for the whole omelette (including the 1/2 tbsp of EVOO I used to cook the mushrooms in). Amazing.


Lunch was just as delicious and it came in the form of a wrap: 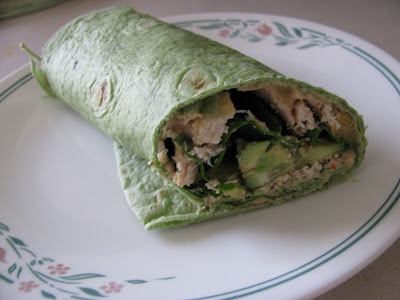 In the spinach wrap:

The wrap was huge, so I ate half of it for lunch along with an orange. 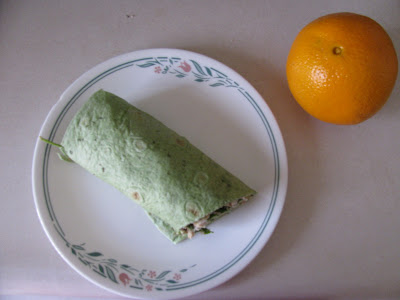 And with that, I'm off to go wolf down the other half of that wrap for dinner ;) Have a great night!
Do you participate in Lent? If so, what are you giving up this year?
Posted by Krista at 6:42 PM