No, it's not actually the end of the world; that's just the name of our annual end of the semester Kappa Psi party :) We have it every year in Big Rapids after everyone's last final and it's always a blast. We start out at a local park where we grill burgers and hot dogs, play volleyball and football, and just relax and enjoy the fact that we're done with finals. After we're done at the park, we have a big get-together at the Kappa Psi house.


This year, Eric, Aimee and I got stuck at our five hour P4 orientation down in Grand Rapids and by the time we made it to Big Rapids, dropped our stuff off at the Kappa Psi house and drove to the park, it was already after 7:00. Apparently everyone was hungry because when we got there almost all the food was gone! At first we were sad because we had our hearts set on burgers, but then Eric and I remembered the commercial we saw for the new Cheese Lovers pizza at Pizza Hut and we knew our problems were solved.


Now, I already knew that I was in love with Pizza Hut's extra cheesy pan pizza, but this new pizza took our relationship to a whole new level. It's all of the delicious cheesy, greasy goodness of a classic Pizza Hut pan only with alfredo sauce instead of marinara. Yeah, that's right. They took the only "healthy" part of the pizza and replaced it with even more fat and calories, and it was amazing. 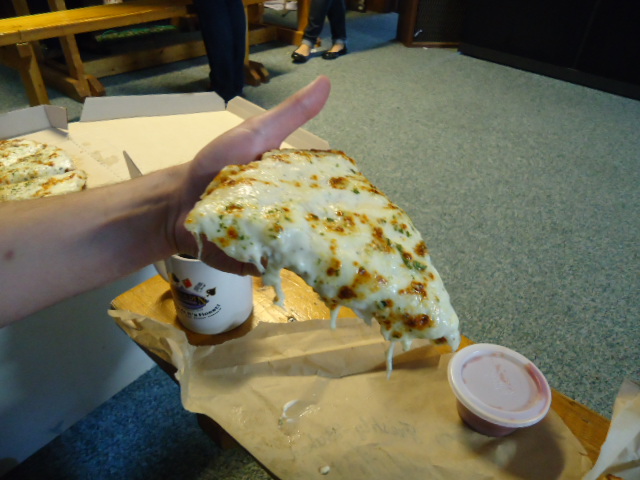 We devoured the entire thing over the course of the night. It was seriously like the pizza of the Gods.

I may not have any pictures from the park this year, but I got plenty of shots at the Kappa Psi house! Oh, and in case you're wondering, the reason we're all wearing green shirts is because every year Eric designs a shirt for the party and this is what he came up with for this year:


He did an awesome job! Everyone loved the shirts.

Here are some pictures from the night:

Through-out the course of the night, I had quite a few dranks (my drink of choice was mango flavored vodka and Diet 7-Up) and I snacked a lot on all of these goodies: 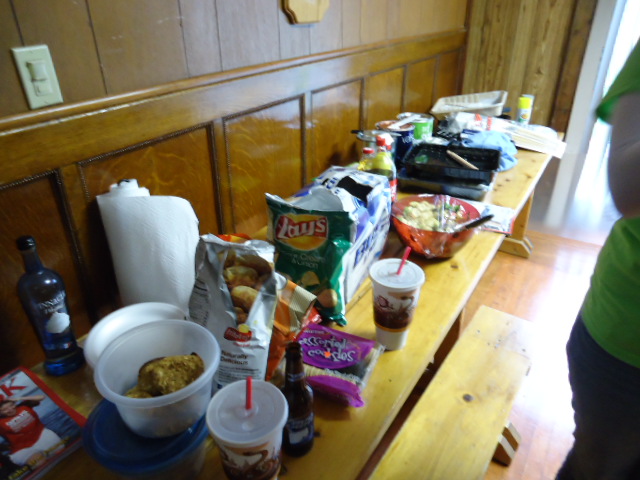 I believe I had about twelve of my oatmeal raisin cookies: 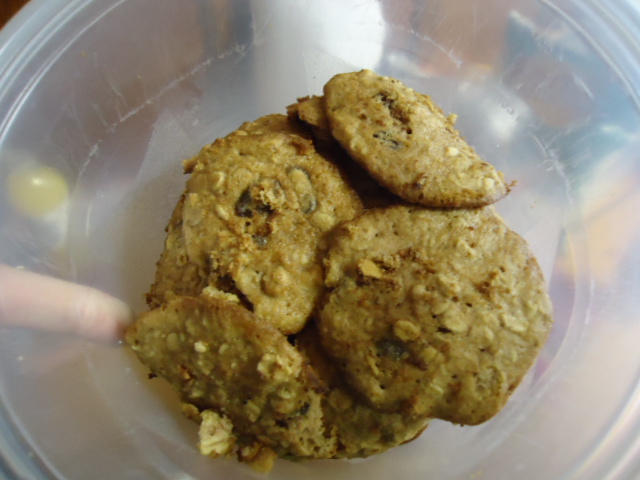 
We also do mock elections every year, and for the sixth semester in a row I took home the two awards that were actually created for me: 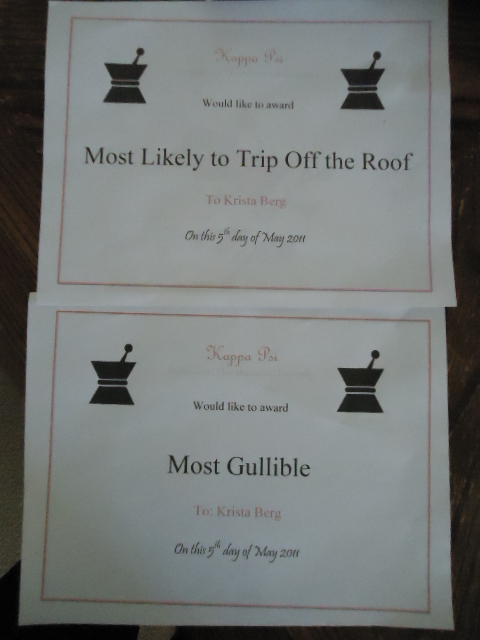 And this year I also took home a new one: worst driver. My parents will be so proud. 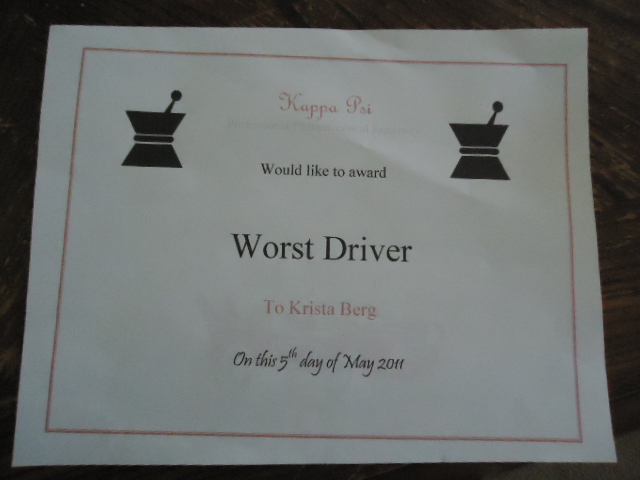 As always, this year's party was a TON of fun, and I can't wait for the next time when we're all together again. At next year's End of the World party, Eric, Aimee and I will be totally done with pharmacy school forever!!

As expected, we woke up this morning feeling like total garbage. That's what happens when you put so much junk in your body at one time, but every once in a while it's worth it ;) We headed back to Grand Rapids pretty early because I wasn't getting much sleep on the couch at the Kappa Psi house. Once we got home, I made a delicious bowl of oatmeal and felt a lot better after that. Then I napped for a couple hours and after I woke up I managed to drag my butt to the gym.


Even though it's hard to get yourself moving when you're running on such little sleep, I actually always try to get a good cardio session in when I'm hung over because I feel so much better when I'm done! It almost feels like I'm sweating out all the toxins in my body, and it just feels so good. I cranked out 4.0 miles on the treadmill in 41:12 and I was really happy about that.


After my run I was starving so I came home and made a couple of bean burritos with refried black beans, cheddar cheese, guacamole, sour cream, and spinach: 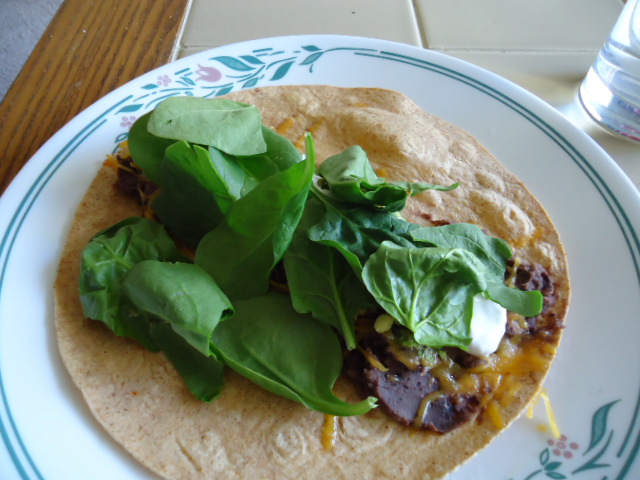 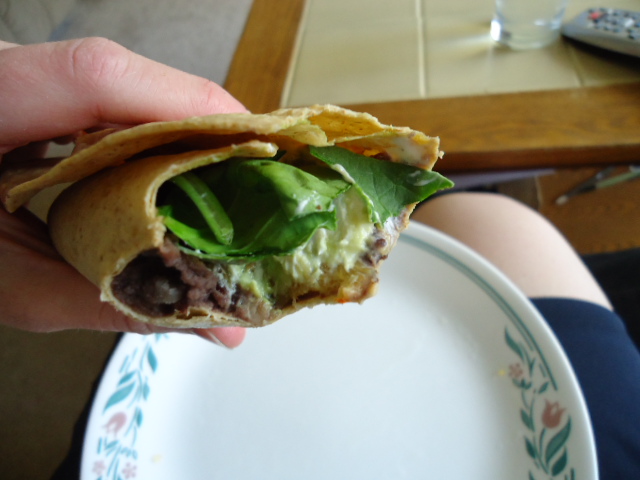 Alright, time to get back to Celebrity Apprentice. One of my favorite things about being done with school for a little while is all of the time I have to catch up on TV shows!!

A big bowl of oatmeal and a good work-out always does the trick for me!
Posted by Krista at 6:35 PM