Well, technically it isn't his birthday until tomorrow, but since it's on a Monday and we'll all be busy working all day, we partied it up last night instead!

As I mentioned yesterday, Eric's sister, Chelsey, came to stay with us and she brought along three friends to help us celebrate. She goes to school up in the U.P. and drove a long way to come see him, even though she could only stay for one night. Now that's some true sibling love right there :) 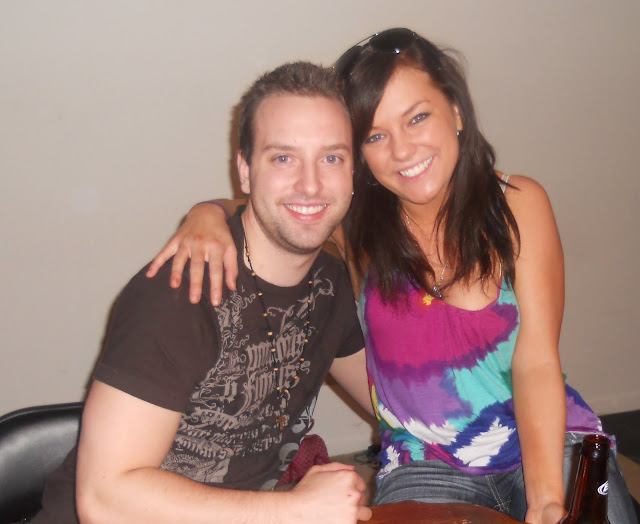 We started out our night with dinner at Quaker Steak and Lube, per the birthday boy's request. It was a really cool themed restaraunt that had motorcycles, jet skis, and even cars hanging from the ceiling! 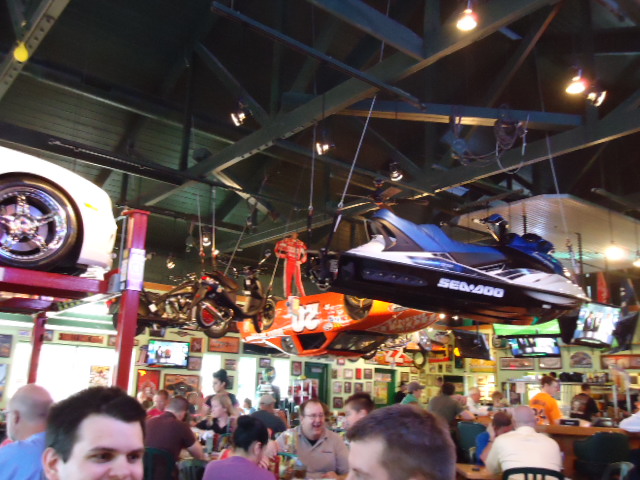 There was a motorcycle hanging right over our table. 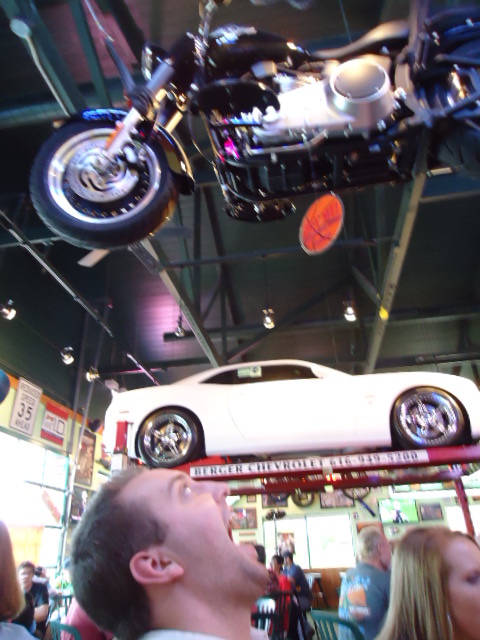 Eric and his sister ordered a massive appetizer tower to share: 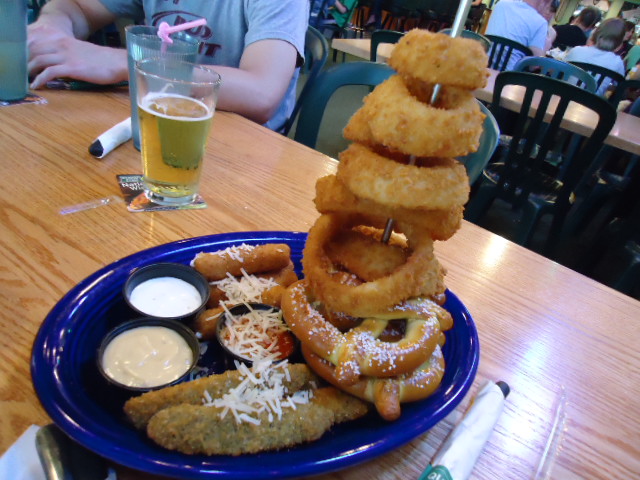 And I rolled with a pulled pork sandwich for my meal, plus fries on the side because that's what I was feelin' last night! Plus, I needed lots of substance to soak up all of the alcohol I'd be drinking later, so that makes it perfectly ok ;) 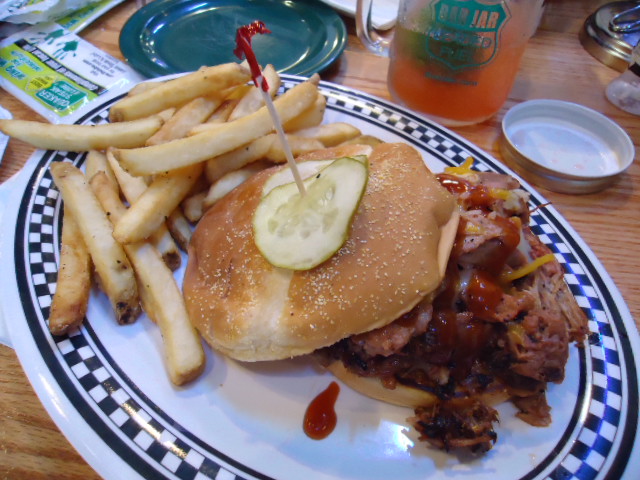 The food was delicious, but the company was way better. 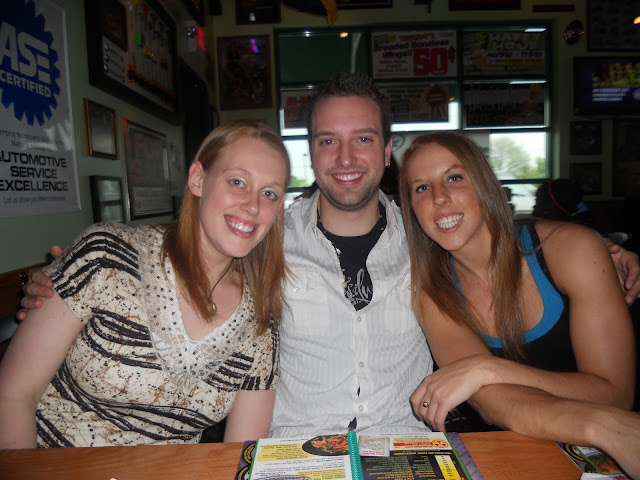 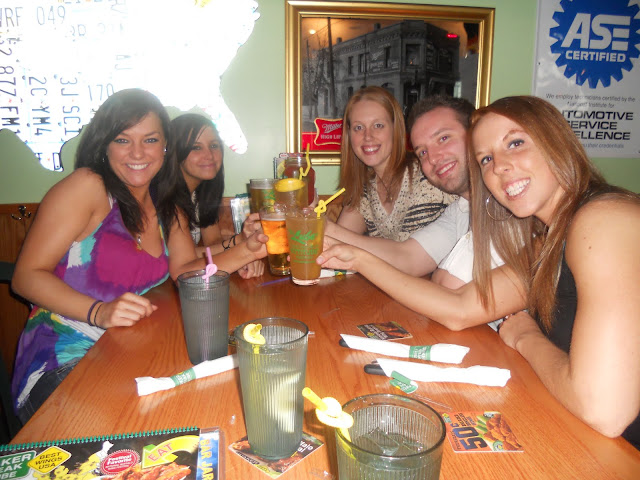 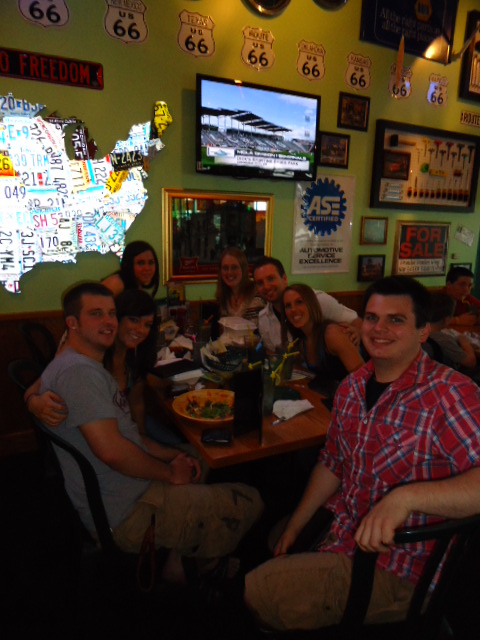 ﻿
After dinner, we came back to our apartment to enjoy some birthday cupcakes. While we were singing "Happy Birthday," I took what is quite possibly the greatest picture of Eric ever. 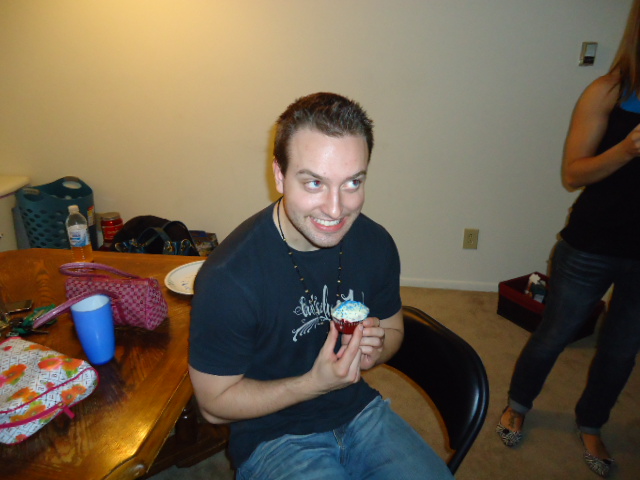 Then his sister tried to get a picture with him and her cupcake, and this turned into a major cupcake fail. 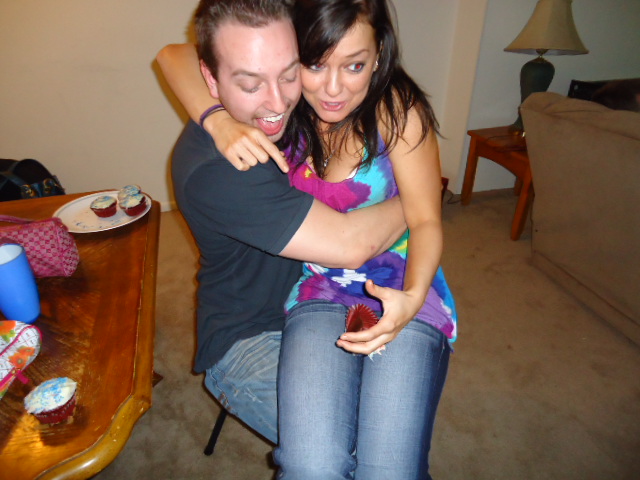 After cupcakes and a few drinks, we got ready to go out to The B.O.B. The BOB is pretty much my favorite place in downtown Grand Rapids and has a restaraunt, lounges, a comedy club, and a nightclub all wrapped into one Big Old Building (B.O.B.). It's a nicer kind of a place so the girls all wore dresses, but dresses are not really my thing so I stuck with jeans and a nice top. Since I've been there before, I already knew that a lot of girls wear jeans so I wouldn't feel out of place. 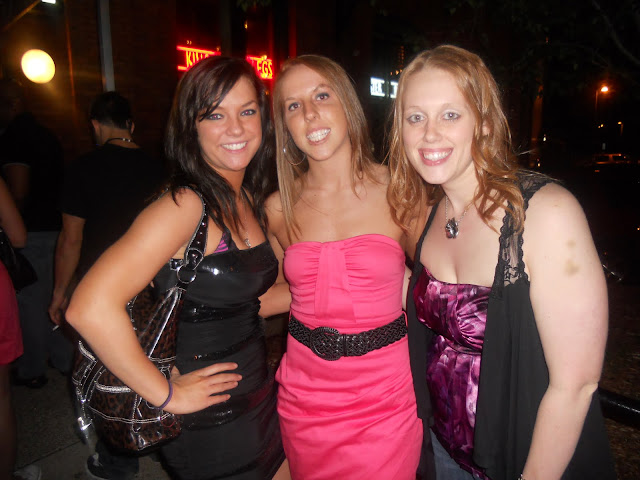 We started out with a drink at the Monkey Bar Lounge. 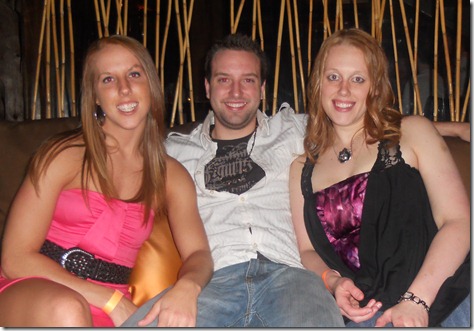 And then we spent the rest of our night at the Crush nightclub where we danced the night away and all took turns buying Eric birthday drinks, totally ignoring the fact that we knew he had to work a 10 hour shift today ;) He had so many people handing him drinks that he could hardly drink them fast enough! 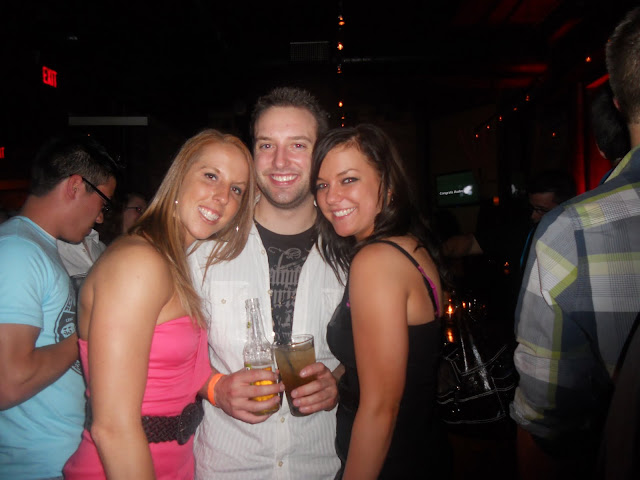 Don't worry, the rest of us definately enjoyed our fair share of beverages as well. 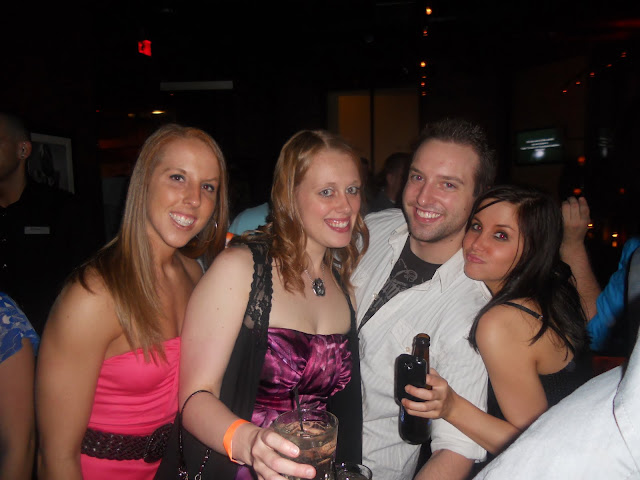 It was a great night and we all had a blast. I'm so glad that Chelsey and her friends made it down to see us. They were so much fun and I know it helped make Eric's birthday even better :)
Breakfast.
I woke up this morning craving the same thing I always do after a night of drinking: a giant bowl of peanut butter oatmeal. Unfortunately, I was completely out of peanut butter :( Therefore, I did what any normal person would do: I got in my car and drove all the way to store at 8:30 am on a Sunday morning after getting 4 hours of sleep to buy myself a jar of PB. I was on a mission for a very specific kind that they only sell at Target: 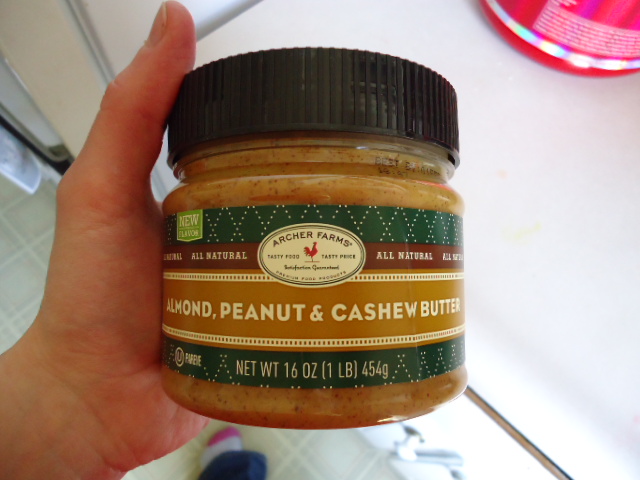 This is my absolute favorite nut butter to use in oatmeal because it is so runny and it mixes really well. I highly recommend it if you've never tried it! 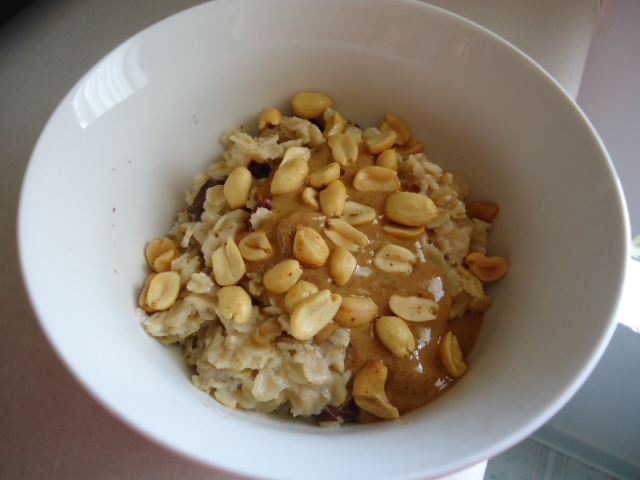 So flippin' delicious.
Oh, and while I was on my way home from Target I decided to stop and pick up a special treat for all of our hungover guests... 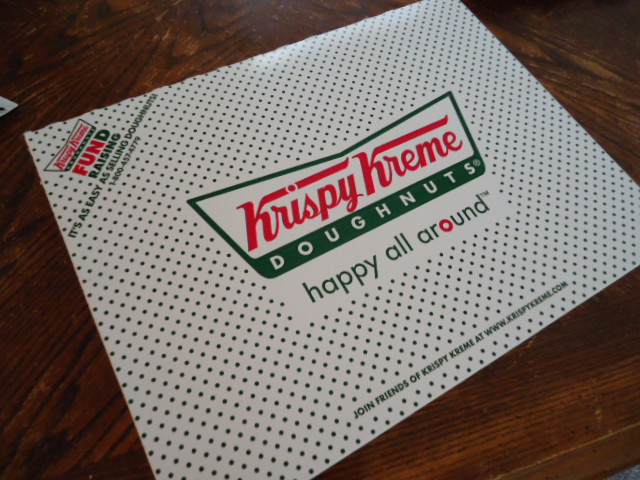 I believe the words "Krista, you are my hero!" were yelled out as they all made a dive for the warm doughnuts :)
Well I've got some major grocery shopping to do this afternoon and I'm trying really hard to muster up the energy to go to the gym. I'm having a medical procedure done on Tuesday afternoon (more details on that tomorrow) and I pretty much won't be able to exercise for the three days following the procedure, so I really can't afford to miss today's or tomorrow's work-out!
Enjoy the rest of your Sunday :)
Question for ya'll:
What is your go-to drink when you're trying to watch your calories?
I usually roll with rum and diet or light beer, but I'm getting kind of sick of those! Any other suggestions??
Posted by Krista at 1:50 PM