Wingstock 2011 With Hinder And Seether

Last night I tried a new-to-me pre-marinated tilapia for dinner. 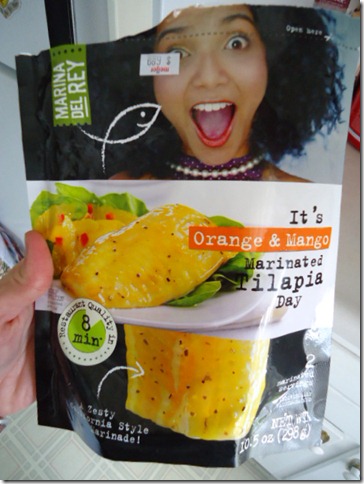 I am not the biggest fan of tilapia but I’m always trying to find new ways to get myself to eat it because I know how healthy it is. Unfortunately, this product did not pass the make-tilapia-taste-good test. 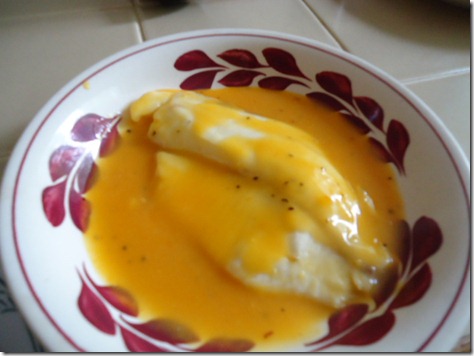 I actually really did like the orange and mango marinade and probably could have eaten it with a spoon, but throw some fish in there and it just tasted..wrong. Maybe I’m just not a fruity fish kind of girl, but the flavors did not go together at all. I ended up eating just over half of it and then throwing the rest out and making a bowl of cereal. At least I had some delicious sautéed mushrooms on the side: 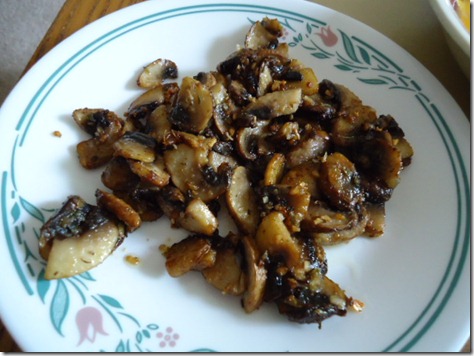 I cooked them up on the stove with some olive oil and seasoned them with onion flakes, garlic powder and oregano. Delicious! 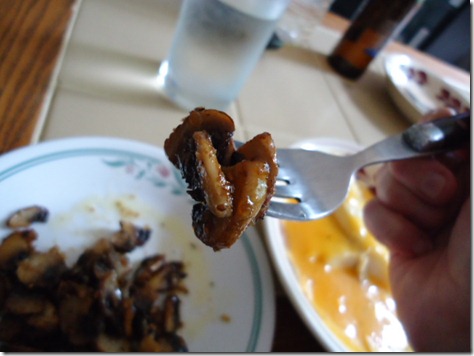 Half of an orange mango tilapia filet, sautéed mushrooms and a bowl of cereal: dinner doesn’t get much more random than that!

After dinner Eric and I headed to 5/3 Ballpark for a concert! It was Wingstock 2011 (hosted by a local radio station) and Hinder and Seether were the headliners. I love both of these bands and had been looking forward to this show for weeks, plus I just love concerts in general. (If you recall, I saw Linkin Park for the fifth time in January and went to the Stone Sour Avalanche Tour at the end of March.)

Unfortunately, I did something stupid last night and got the time of the concert wrong. I thought it started at 7:00 and it actually started at 6:00, so we arrived an hour late. Luckily we didn’t really care to see the first two bands (Wayland and Sick Puppies) and the second band was still on stage when we arrived so it actually worked out. When we arrived to the venue we grabbed a beer: 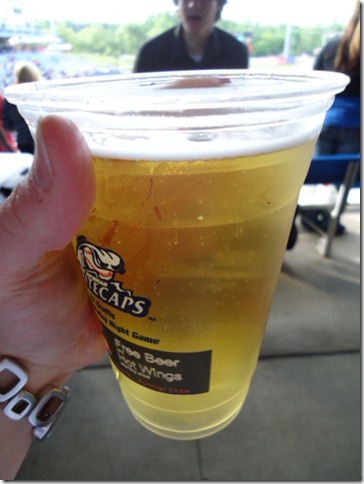 But I quickly gave it to Eric when I saw that they had strawberry daiquiris. I love me some beer, but summer just always puts me in the mood for fruity frozen beverages :) 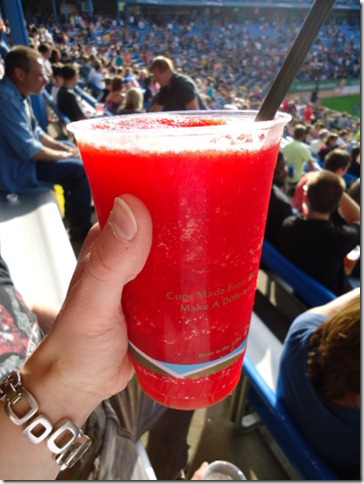 Then we headed down to the field/pit to get our spots for the next performance. 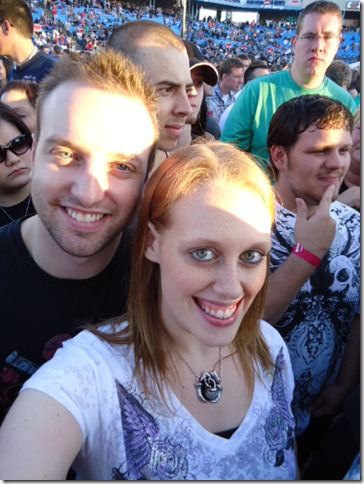 Hinder was up first, and they were awesome! 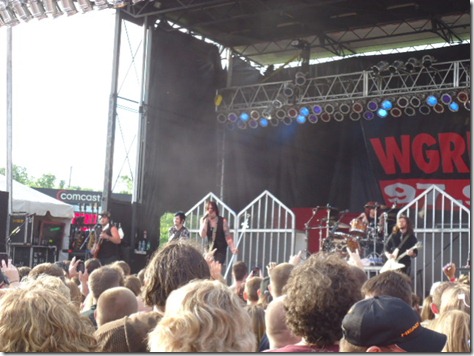 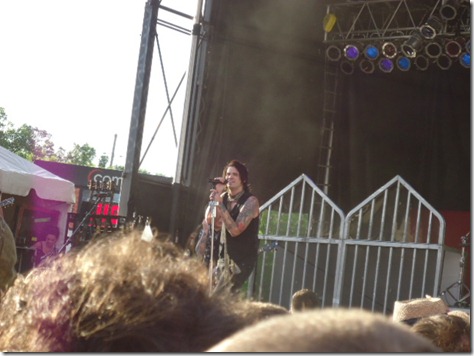 They played a lot of their older stuff, which I loved because I’m more familiar with it than what’s on their latest album. Eric has seen them in concert before and he said they were even better this time. 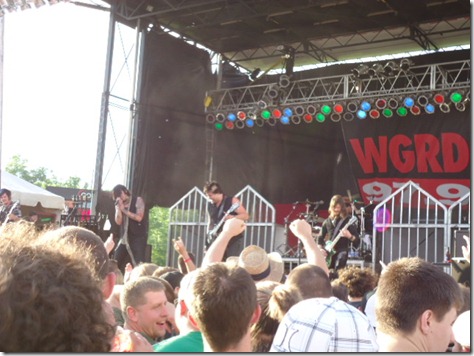 Next up was Seether, and they were amazing! 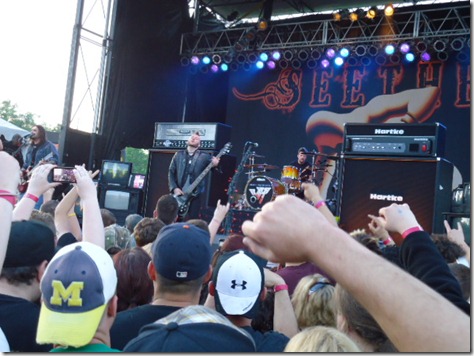 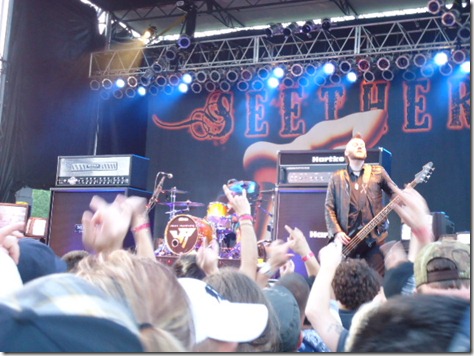 The crowd got CRAZY during this performance! Everyone was pushing and shoving each other as people tried to make their way as close to the stage as they could. I actually really had to pee during their entire set, but made myself hold it because once you left that pit (if you successfully managed to squeeze your way out!) there was no way you were finding your way back in!

I look like a total goon in this picture, but it’s the only one that we managed to get that gives you a good idea of how packed it was in there! 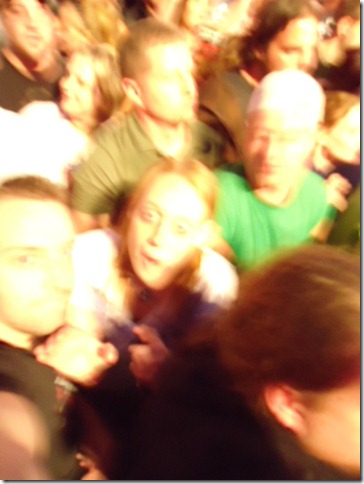 I loved every minute of it though :) I just have so much fun at concerts and enjoy being around so many people that are as excited and energetic as I am, even if some of them are crazy drunken buffoons ;) Seether put on such a great show, and it was a fantastic end to the concert. 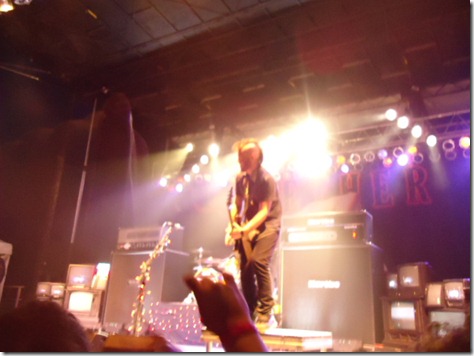 After the concert we ended up meeting with some friends downtown, where we hit up a couple of local dive bars that I’d never been to. We concluded the night with some dancing at Monte's and of course, the obligatory late night Steak ‘n Shake. I enjoyed a delicious cookies ‘n cream milkshake that I slurped down too fast to photograph ;)

Well, it’s almost noon and so far I’ve done nothing today except sit on the couch. Time to get my butt moving!

Do you like going to concerts? Tell me about your favorite one!

I absolutely love going to concerts, I always have so much fun! The only things I don’t like about them are that my ears ring for 24 hours afterwards and the fact that I would probably test positive on a drug test right now thanks to all the second hand pot smoke.