First of all, this is your last chance to enter my giveaway! It ends tonight at 8:00 PM Eastern time! Click here to enter.

Alright, so after we finished our pre-mud photo shoot, we headed over to the starting line and waited for 3:00 to come around, which was our wave. (The race is so big that it is divided into numerous waves that go all day long. Every half hour, a new group of people take off to tackle the course. The first wave was at 8:00, and even though we signed up over six months ago in January, 3:00 pm was the soonest we could get in.) Finally the announcer counted us off and soon we were running!

The first half of the race was the definitely the hardest in terms of running. We ran for almost a mile before getting to the first obstacle, and it was SO hot outside. By the time we got to the aid station at the halfway mark, my mouth was bone dry and I was so grateful for some water! It seemed that the second half of the race had more obstacles, which was fun and it was nice to break up the running. I was definitely the slowest in our group, and I felt bad because I know that I slowed them down a lot. I even took a few walking breaks, which I’m kind of mad about now as I look back because I know I could have pushed myself a little harder. Here’s a map of the run and where the obstacles were located. The two long stretches of running were the worst. 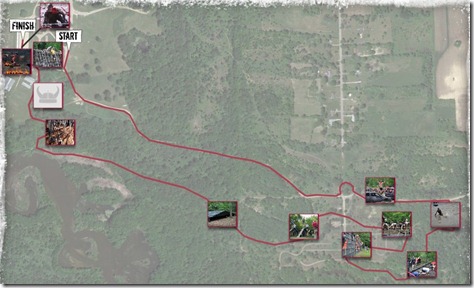 With regards to the obstacles, they were much easier than I anticipated. I was the most nervous about a giant “wall” that a friend told us about that had supposedly caused runners a lot of difficulty. You have to use a rope to pull yourself up over the wall and I thought I would for sure have trouble with that. However, it actually wasn’t bad at all and I was stoked as I hoisted myself up over that wall with hardly any difficulty and climbed back down the other side. 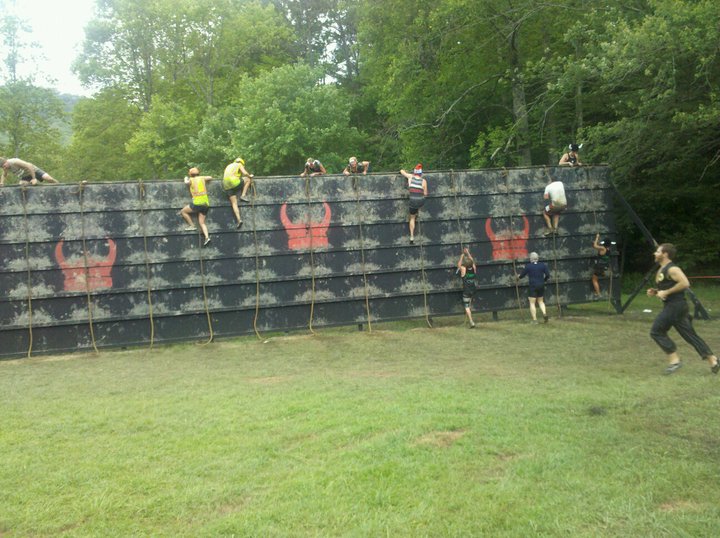 (I found this photo on this blog thanks to Google magic)

We were pretty muddy by the time we finally made it to the end of the course, but the final mud pit was definitely the messiest. The pit was waist deep and you end up having to crawl on your hands and knees because there’s barbed wire above your head. We were all a hot mess by the time we were done! 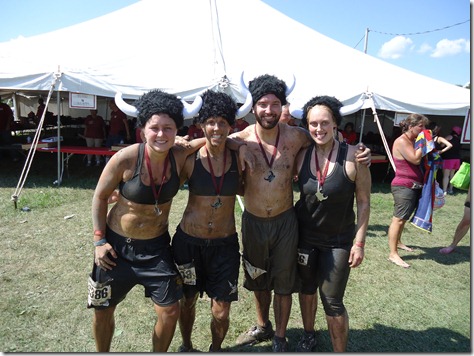 But we were proud to be warriors 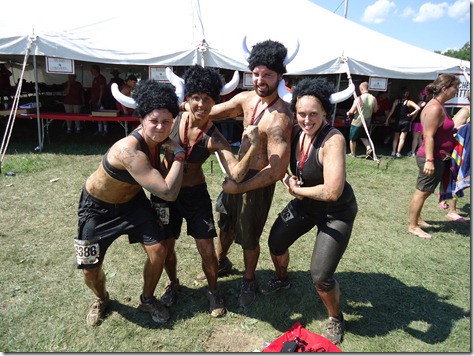 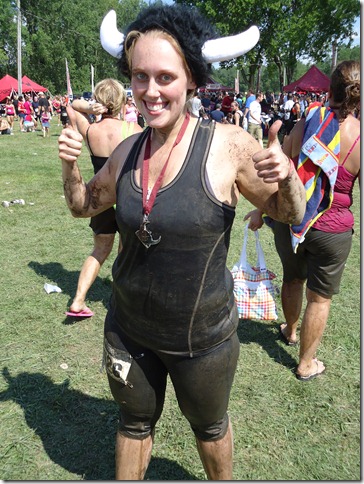 I was so happy and so proud that I finished (and made it through *all* of the obstacles), but the mud. Oh, there was so much mud. 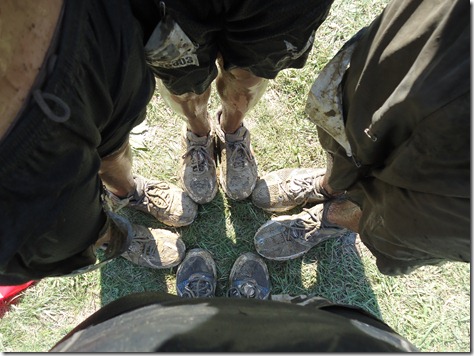 These pictures just don’t do it justice. It was EVERYWHERE, and I mean everywhere. In our socks, bras, hair, ears, oh; and those lovely lady parts? Yeah, it was there too.

We eventually made our way over to the shower area where we were able to rinse off a little, though I really didn’t feel much cleaner after. 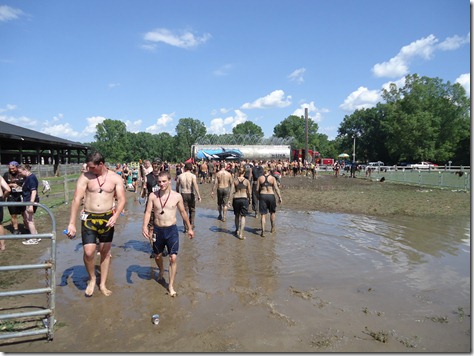 Then we made our way back to the car where and changed into some clean clothes before we went back to the race area where we hung out for a little while. On our way back we passed by this huge pile of donated shoes that they will be cleaning and giving away to people who need them. So cool! 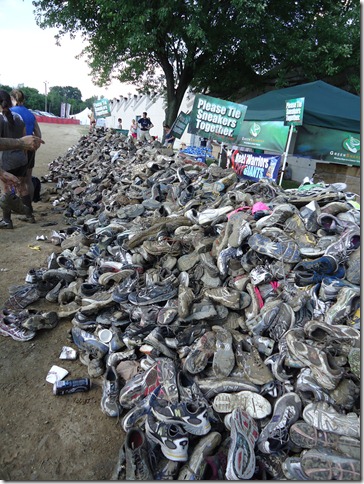 Eric and Babs cashed in their time chips for some free beer (my stomach was really bothering me so I gave my chip to Eric). 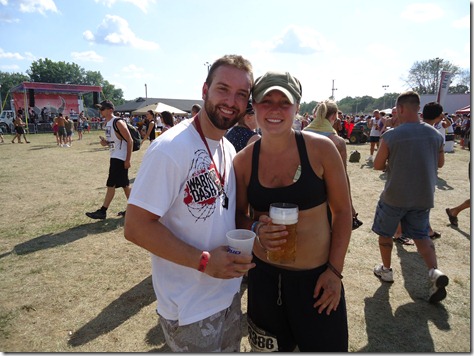 We were planning on getting big turkey legs as well, but then we found out that they were $6.00. Um, no thank you. However, I soon saw something that was not only better, but was free! 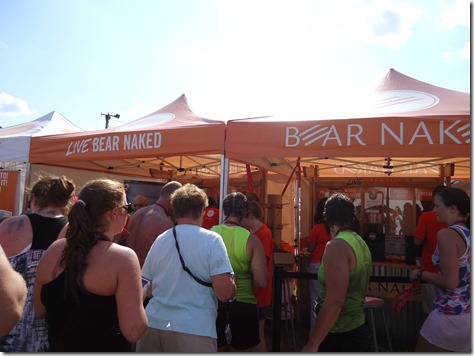 Yep, Bear Naked Granola had a booth at the race! AND they were giving out free bags of granola in a flavor of your choice. I went with the maple pecan and chose vanilla almond for Eric, since I made him give his to me

When they gave you your samples, there’s a blank on the bag where they write in what you “need energy for,” since this granola is apparently supposed to give you energy. When the lady asked me what I need energy for, I told them I need it for my rotations (gah, I start tomorrow!). Then they asked Eric what he needed energy for and he said the same thing, so she wrote “copy cat” on his bag 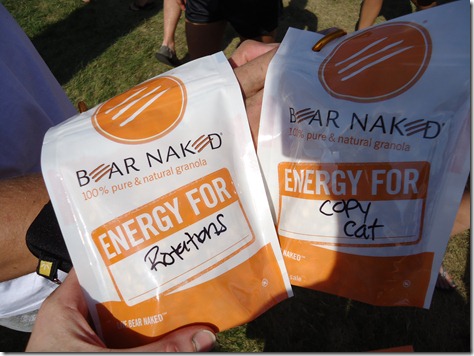 We then made him the designated granola carrier. 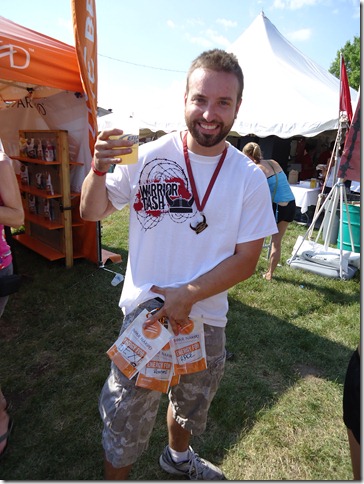 Then we chilled and listened to the live music while Eric and Babs finished their beers. 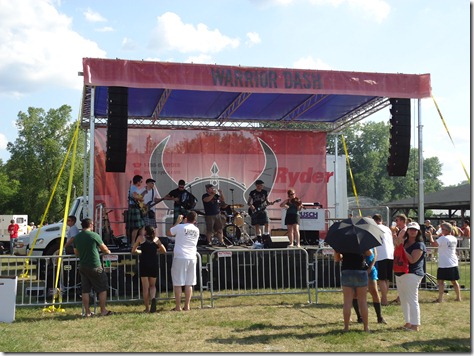 It was a great day and I’m SO glad that I did this race.

Finishing something this difficult has really motivated me to start running and training again. I’ve been slacking off lately and I forgot how good it feels to accomplish goals that you set for yourself. I might do another mud run in Grand Rapids at the end of August, and I definitely want to do at least another 5K or 10K before winter gets here. It’s time to get my butt back in gear!

Off to go do things. Enjoy your Sunday!