Ugh, today was one of those days when I woke up and stepped on the scale to see virtually all of the hard work I did last week completely undone. Calorically speaking, I don’t think it’s actually possible that I put on that much weight over the weekend, so I’m hoping that after a few days of hard work that number will go back down again. I kind of feel like my body just wants to stay at 170-175 forever. I can get below it when I’m working really hard, but all it takes is the tiniest little thing to put me back over. So frustrating.

Breakfast this morning was a recipe that popped up on my Facebook homepage from the Muscle and Fitness Hers website. The recipe was for peanut butter pancakes, and since they’re from M&F I knew that they’d be a lower on the calories and higher on the protein than regular pancakes. Here’s the recipe in case any of you want to give it a go:

Peanut Butter Pancakes
From Muscle and Fitness Hers

I doubled the recipe to make enough for two people for breakfast (I’m sorry, but one pancake is not enough for me). I also added extra cinnamon and left out the sweeteners, and topped them with a dab of butter and drizzle of syrup (which was added after the photos). 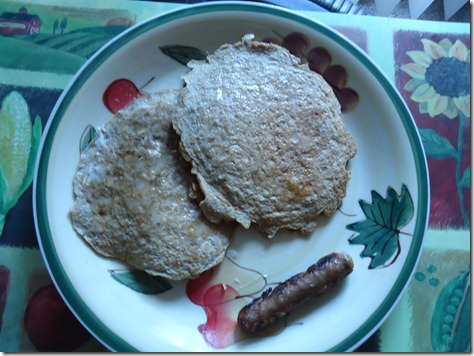 (Served with a side of turkey sausage, obviously.)

I’ve never made flourless pancakes before, but I see recipes for them all the time. The verdict? Eh, they were okay. I honestly thought they tasted kind of “eggy,” or spongy in other words. I think I’d make them again if I was desperate for pancakes and didn’t have any mix or flour on hand, but they were definitely not my favorite. However, I decided to go ahead and post the recipe because many people like these kinds of pancakes and they’re actually very healthy. 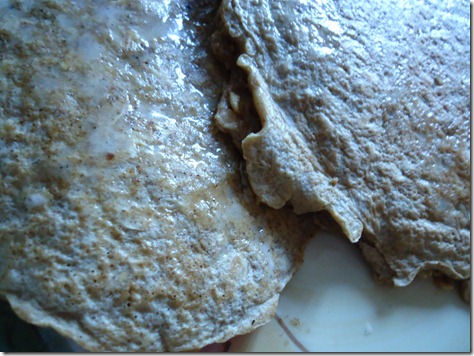 Have you ever made a similar pancake recipe (ie, with egg whites and oatmeal)? If you try this recipe, let me know; I’m curious to know what you think.

I know I didn’t post too much about my food this weekend, but there really wasn’t too much to blog about. I was pretty down on Friday night because of my kitty cat and wasn’t too hungry for dinner, but Eric once again proved that he is the best friend ever and took me out for a special treat. 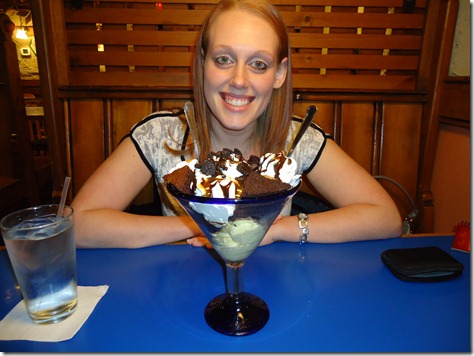 I wrote about this amazing chocolate volcano from Pietro's in my What I Wish I Ate Wednesday post, and it was just as delicious as I remember it being. Even though I warned him about the size of the dessert, Eric was still shocked when the massive bowl arrived. 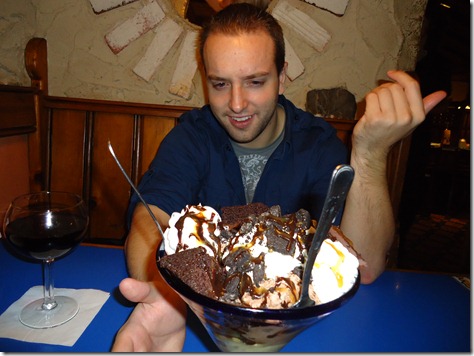 My sweets tolerance has apparently gone way down because the two of us could not finish this. Believe it or not, there was a time when I’m sure I could have eaten that entire thing by myself. Now I get sick to my stomach when I only eat half. Crazy.

When we weren’t eating ice cream for dinner, we were eating stir-fry. Eric whipped up a delicious shrimp stir-fry for a late lunch on Saturday 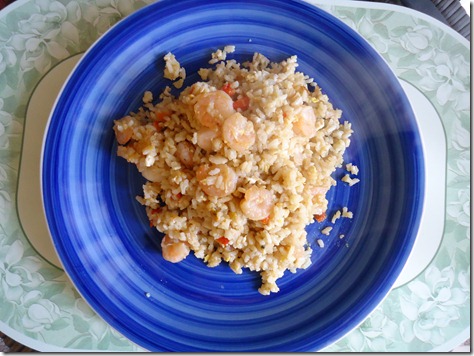 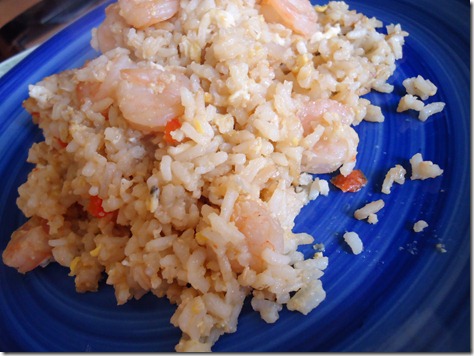 And a chicken stir-fry yesterday that was just as tasty.

Well, we’re on our way to Kalamazoo right now to get some work done for our instructional videos we have to make for our rotation. I also have a lot of assignments I need to do when we get back, plus we still have to go to the gym. It’s sure to be a busy day!