Here’s To A Healthy Week

I hope everyone is having a fantastic weekend. Work was pretty good; it was steady but manageable both days (in other words, I didn’t leave the pharmacy wanting to pull my hair out). Also, I’m pretty sure that I have the best boss in the world. He’s so incredibly flexible with my school schedule and he really truly cares about his employees. Plus, he bought lunch today 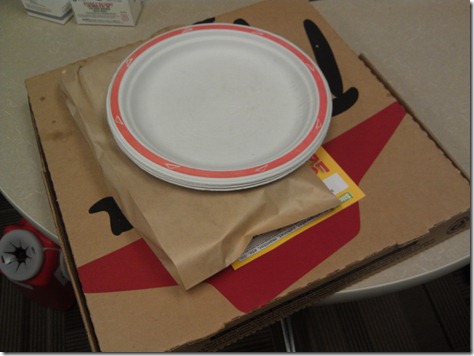 When I was in my first year of pharmacy school and living in Big Rapids, I used to drive home every 2-3 weeks and work the weekend. Every time I worked his weekend, he would always order Pizza Hut for us. Today when he offered to buy lunch, I suggested Jimmy John’s for a healthier alternative to pizza. Unfortunately when I called, I was told they didn’t deliver to our location. Back to pizza it was!

Being the nice guy that he is (and knowing that I’m trying to watch the calories), he let me choose whatever kind of pizza crust and toppings I wanted. I ordered a thin crust pizza with half veggie for me and half pepperoni (plus some breadsticks) for him. 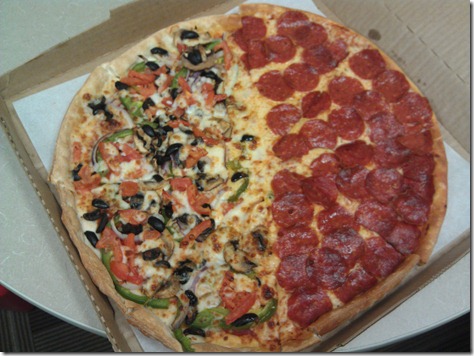 (FYI, you slash over 100 calories a slice by choosing thin crust over pan or stuffed crust. However, don’t be fooled by today’s choice: I definitely love me some cheese lovers.)

As delicious as this pizza was, it honestly didn’t even come close to comparing to my mom’s homemade pizza that she made for dinner last night. 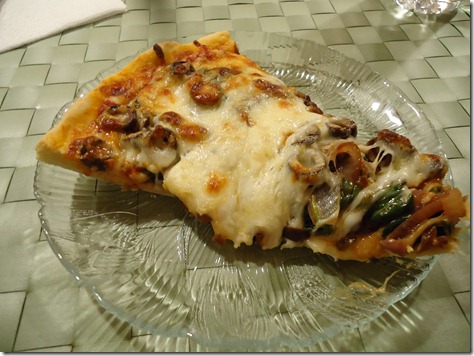 She makes a homemade crust and loads it with pizza sauce, onions, mushrooms, spinach, black olives, and cheese. A lot of times she’ll throw some ham on there too. So good!!

Another delicious home cooked meal was enjoyed this evening as well: 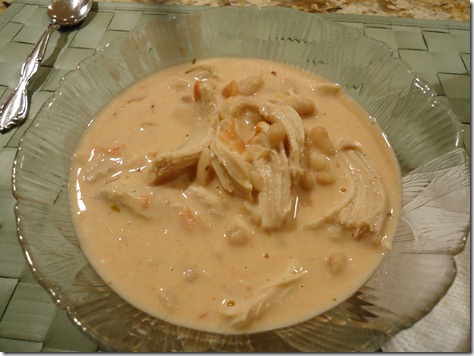 It’s her own spin on white chicken chili and it’s the best I’ve ever had. This is by far my favorite homemade soup of all time.

Served with some homemade confetti cornbread: 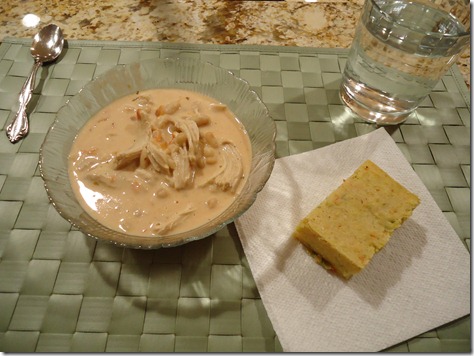 (The cornbread is called “confetti cornbread” because it’s full of little bits of bell pepper, which makes it colorful.)

As usual, she is sending me back with plenty of leftovers so you’ll probably be seeing this chili a lot this week. Oh and don’t worry, I’m going to have her send me the recipe so I can share it with you guys

You guys know how much I’ve been struggling with my weight. I know I haven’t posted a weigh-in in a while, but I’m just not ready yet. It’s weird because I lost so much weight in 2009 and 2010, but now I don’t even remember what it’s like to have any willpower. I’m always thinking to myself, “Gosh, how the heck did I do this before?!” I also think back to when I was at my lowest weight, 165, and how at that time all I could think about was how I was “so fat” and just wanted to lose more. Now I would do anything to be back at that weight!

Anyways, here’s tonight’s attempt at making it a good week. I wrote about my goals checklist last week, but this week I’m going to do a slight variation of it and post it on the blog. I’m going to make a chart on my whiteboard that looks like this:

As you can see, I’ve already filed in today’s information (thumb’s up means I completed the goal). After I drive back tomorrow, I’m going to fill in my workout plans for the rest of the week. On Friday, I’ll post my completed chart on the blog and see how I did. It’s another way to try to hold myself accountable, so we’ll see how it goes!

Oh, and the reason that I’m only making the chart for Sun-Thurs is because I’m actually going on a little trip up north this weekend. I fly out (yes fly!) on Thursday evening up to Marquette and I’ll be spending the weekend with Eric. I’m super excited since I haven’t seen him since my birthday, so it should be fun!

Here’s to a healthy (and hopefully fast) week!