It’s been a pretty typical Thursday over in these parts, other than the fact that I skipped my workout this morning. I’ve been having trouble sleeping the past few nights and last night when I was still up at 11:30 I decided to nix the workout this morning in favor of some extra zzz’s. However, I did go to my first hot yoga class tonight and it was fantastic! It was a lot different than other yoga classes I’ve gone to because 1) it was HOT! 2) it was PACKED! 70 people crammed into one small room. You make friends with your neighbors quickly

And 3) the instructor walked around giving out instructions instead of posing at the front of the room. It was different, but I liked it. I always feel so refreshed after yoga, I love it!|

I was really feelin’ oats when I woke up today and made a huge bowl to power me through a morning at my rotation. 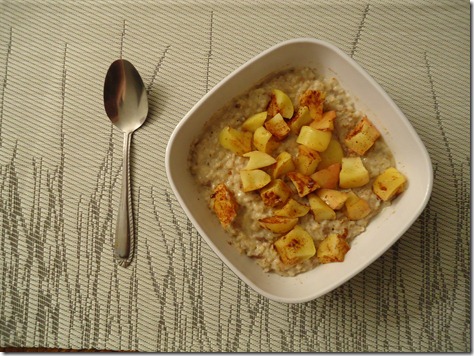 I don’t think I will ever, ever get sick of this combination. 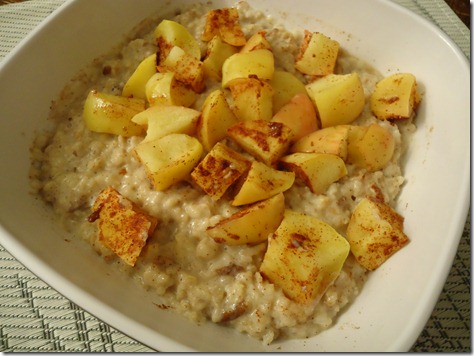 This extra large bowl of oatmeal negated my need for a morning snack, but here’s what I packed up for lunch: 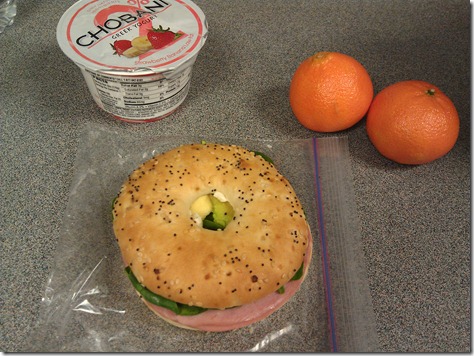 Ham sandwich on an Everything Bagel Thin with ham, spinach, 1/4 of an avocado, and a Laughing Cow cheese wedge; plus a strawberry banana Chobani and two clementines. 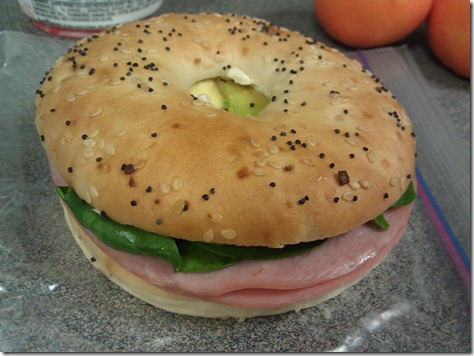 This sandwich was delicious and a nice change of pace from my usual salad (plus it packed a lot more protein) and I have a feeling I will be repeating this lunch tomorrow.

Dinner was the last of my leftover stir-fry (that I ended up adding a few dashes of soy sauce too – delicious!) but I’ll spare you pictures since it looks the same as it does in this post. Instead, I wanted to talk a little bit about something that was brought up on the Facebook page this afternoon. I was doing some research on vitamins and minerals today while I was at my rotation and when I was looking at dietary sources, I realized that practically every single one is found in egg yolks. (Now I know why that personal trainer was so obsessed with them!) I was pretty impressed and posted something about it on my Facebook wall, and a few people commented that it would be helpful to do a post about the uses of vitamins and minerals and what the recommendations are.

Obviously this stuff interests me since I’m going to be a pharmacist and some of the most common questions we get pertain to vitamin and mineral supplements, so I put together a brief summary about some of the most common vitamins and minerals and why you might use them. Of course, as a disclaimer I must point out that I am not a doctor or registered dietitian, so the information I provide must never be substituted for your doctor’s advice and instructions. Additionally, many patients have certain medical conditions that require additional supplementation, and in this case they may take more than the recommended amounts of a vitamin that I mention here.

As I’m sure you guys are aware, you will probably come across conflicting information about vitamins and minerals as far as what you should take, how much, and the benefits that they may reap. This is just what I would personally say to a patient of mine if they inquired about their use

Here are some of the most common vitamins and minerals that you may hear about:

The most common claim you will hear about B vitamins is that they will “give you energy.” Well, this is not entirely true. B vitamins are very important and while they help you obtain energy from food, but it’s not like taking a caffeine pill. Studies are limited (as they are with most vitamins and minerals) so it’s hard to say exactly what the energy effects are. There are a lot of different B vitamins, but the ones I see used most commonly are B3 (niacin), which may be used for high cholesterol, and B12 (cyanocobalamine) which is used in certain types of anemias.

B vitamins help promote a normal appetite, good vision and skin, nervous system health, and red blood cell formation. You can find B vitamins in foods like meat and dairy products, whole grains, and green leafy vegetables. Vegetarians are often advised to take a Vitamin B supplement because they don’t eat meat and many don’t eat dairy, which are important sources of this vitamin.

Vitamin C has a reputation for helping people get better when they have a cold. This is kind of true. The recommended daily intake of vitamin C is only 75-90 mg (which can be met quickly by eating fruits and vegetables), but high doses of vitamin C (500-1000 mg/day; the amounts found in Vitamin C tablets) have been shown to help prevent colds and may decrease their severity. Again, studies are lacking and you definitely do not NEED this much vitamin C every day, so take this information with a grain of salt. 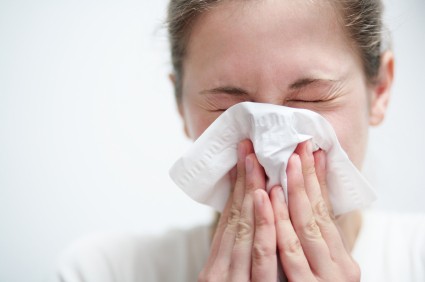 The body needs Vitamin D for the proper formation of bone and it helps the body use calcium, which is a major component of bone. The recommended daily intake is 400-1000 IU/day, but unless your doctor has instructed you to take it (it is typically taken with calcium in patients who have or are trying to prevent osteoporosis) then supplementation is usually not necessary.

One thing to add is that if you are browsing Vitamin D supplements you’ll see that they come in two forms: D2 and D3. D2 is the plant form (ergocalciferol) and D3 is the animal form (cholecalciferol) but they provide the same benefits and it really doesn’t make a difference which one you use. Regardless, it is still typically recommended that patients grab a bottle of D3 or a combination that has D3 in it.

Vitamin E is an antioxidant, which means it helps protects your cells and membranes from free radical damage. Free radicals are toxic compounds that are generated after certain chemical reactions in the body. The recommended daily intake of Vitamin E is about 15 mg/day, but a deficiency is rare and if you eat a well balanced diet then supplementation is not necessary.

As I mentioned earlier, calcium is the major component of bones and teeth and it’s important for everyone to get an adequate intake throughout their life in order to help prevent osteoporosis. While calcium supplementation is often recommended to most women, I personally don’t think that it is always necessary because most people get enough from their diet. For example, the recommended intake is 1000-1200 mg/day, and an 8 ounce glass of milk has 300 mg. Similarly, 8 ounces of plain yogurt has over 400 mg of calcium, and 1.5 ounces of cheddar cheese has 300 mg.

If you don’t eat dairy for any reason (vegetarian/vegan, lactose intolerant), then it would probably be a good idea to take a calcium supplement. However, if you do eat dairy and are wondering if you need additional calcium, read the ingredient labels and tally up how much calcium you typically consume in a day. If it’s less than 1000 mg, then you can take a calcium supplement to make up the difference, but you don’t need more than 1200 mg in a day. Iron plays an important role in oxygen and electron transport and your body needs it to make red blood cells. Patients who are more prone to iron deficiencies include growing adolescents (due to their expanding red blood cell mass), women who are pregnant or nursing (again, for the same reason), and the elderly (due to a decrease in dietary iron; as well as blood loss due to GI bleeds, which are common in the geriatric population). Iron deficiencies are fairly common in women, and one cause is blood loss due to heavy periods. However, you really shouldn’t take an iron supplement unless directed by your doctor. They can cause a lot of nausea and constipation, and because you absorb a very small amount from the tablet, you usually have to take three per day. Trust me, this is not fun.

I could probably write an entire post alone about the possible uses for fish oil. Everybody and their mother has probably told you to take fish oil for one reason or another, so I’ve tried to narrow down the list a little to the most common reasons. The Natural Medicines Comprehensive Database is a website for professionals that writes monographs on natural and herbal remedies, such as fish oil. They also categorize the indications and rank the supplement as “effective, likely effective, possibly effective, likely ineffective, or insufficient evidence” for each indication. To sum it up, the NMCD says that fish oil is effective for high triglycerides and likely effective for heart disease (protective). Additionally, it may possibly be effective for a number of conditions, including high blood pressure, rheumatoid arthritis, dysmenorrhea (painful periods), osteoporosis, depression, and weight loss.

To sum it up, I would really only recommend fish oil to patients for high cholesterol and heart health, but there is certainly no harm in taking it for other reasons. In my opinion, unless your doctor, dietitian, or personal trainer tells you to take it, you’ll probably be alright without it.

Alright, so that’s my vitamin explanation in a nutshell. When it comes down to it, unless a patient has a specific vitamin or mineral deficiency and/or has been instructed by their physician to take a certain supplement, I generally won’t recommend anything more than a daily multivitamin and maybe a calcium supplement for the average patient. Once again, I’m no doctor, but hopefully I was able to clear some things up that will make your next trip down the vitamin aisle a little easier

Have a great night my friends and I’ll see ya later!