How I Make My Apple Topping

Hope everyone is having a great weekend so far. As I eluded to in my post last night, I have a very low key weekend in store over here. Last night after catching up on blogs and DVRed television shows from the week, I crashed early and it felt awesome.

I’ve actually been having myself a nice little Saturday. After a full night’s rest, I was up at 7:30 for a morning Turbo Kick class. The reason I still get up early on Saturdays and workout is the same reason why I do it during the week: I am so much less likely to go if I put it off. As always, it felt wonderful to get it out of the way first thing!

I brought a protein shake to go and chugged it after my class before running a few errands. My errands took me to the bank, to an auto parts place (I needed a new headlight and fog light) and to the pharmacy to pick up a prescription. I felt pretty productive having done all of that by the time I got back home at 10:00

It’s pretty cold outside, and the nippy weather put me in the mood for a warm breakfast. 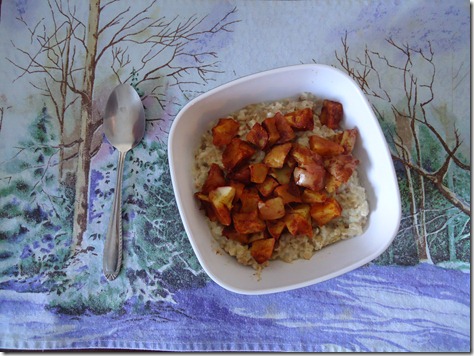 One of my favorites: apple cinnamon oatmeal.

To make this oatmeal, I bring one cup of skim milk to a boil on the stove, then add 1/2 cup of oats and turn down the heat a little. Once the oats are done cooking, I sprinkle it with cinnamon and nutmeg and stir it together with one teaspoon of maple syrup. Then I top it with a microwaved cinnamon apple and dive in! 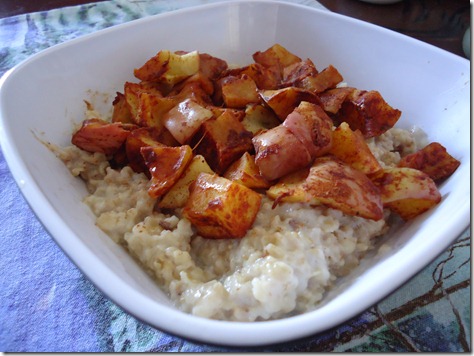 Last week I received an email from a reader about how I prepare my cinnamon apple topping. This is the same topping that I’ve been using on my waffles lately. It’s really simple and I’ve briefly posted the directions before, but I thought I would explain it in a little more detail in case anyone else was curious as to how I do it.

You can use any type of apple, but I prefer Honey Crisp. The ones I’ve been buying lately are small, so a lot of times I’ll use two of them. First I wash it and chop it into bite size pieces. Then I put the pieces in a bowl and sprinkle them with as much cinnamon as I feel like (the amount I use has probably quadrupled since the first time I made one in this post). I also sprinkle on a smidgen of nutmeg, but not much because a little goes a long way. Then I pop it in the microwave for as long as it takes to get soft. The time can vary a lot depending on the power of your microwave. For example, at my parent’s house it barely takes a minute to cook thoroughly, but it takes nearly three minutes in my cheap microwave

After it’s done heating up I simply pour it on top of my oatmeal or waffles, or just eat it plain for a healthy sweet treat. So, so good.

I also took the time today to prep myself a yummy lunch. 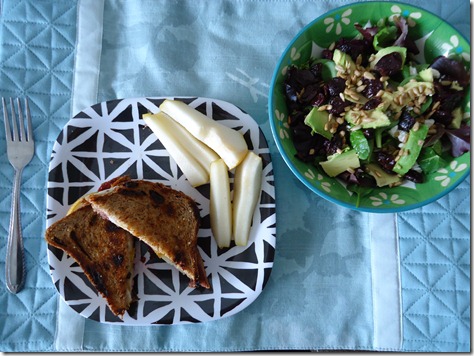 I made a grilled pear sandwich on cinnamon raison Ezekiel bread that also contained a slice of Muenster cheese and raspberry jelly. 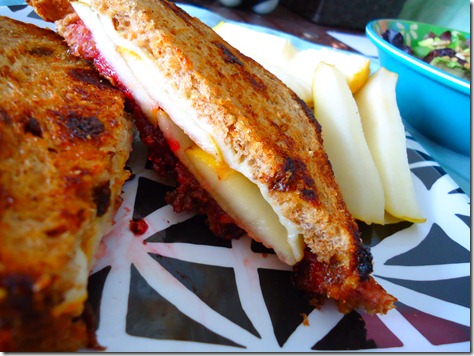 I enjoyed it with an avocado salad for some veggie action. 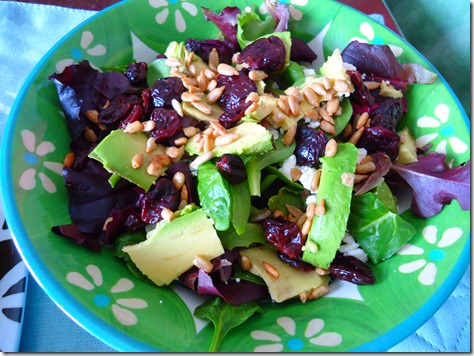 I have no idea what the rest of the day has in store, but I have a feeling it may involve a trip to the mall

Have a great weekend!
Posted by Krista at 3:18 PM