Wow, this weekend has been CRAZY. Before I get to that though, I just wanted to thank everyone for their sweet comments on yesterday's post. It makes me feel so much better to know that I’m not alone in this and that everyone struggles, so I really appreciate all of your comments. The last two days have been good, so I’m hoping I can keep up this momentum.

Alright, so back to my weekend! to start, I’m actually up north in Traverse City right now. I was scheduled to work this weekend so I left right after my rotation on Friday to head up here. I knew that we were supposed to be hit with quite a bit of snow early in the evening, but I had no idea how bad it was actually going to be.

Everything was fine from Grand Rapids up until about Cadillac, and that’s when it started to snow and the roads got slushy. I had to slow way down and was going about 45 mph on the freeway for the most part. By the time I reached Kingsley (about 20 minutes east of Traverse City) it was a full on blizzard and the weather was slowing me down even more. I finally made it home safely at around 7:30, but it definitely did not look like the snow was going to slow down anytime soon. 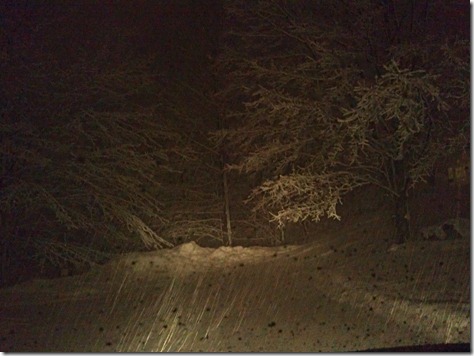 (The bottom of my driveway)

After quickly parking my car and hurrying inside, I spent the next couple hours eating dinner, chatting with my mom and doing some laundry. We both got tired pretty early and I was just getting ready for bed when I heard her scream my name from across the house. I came over and asked what was wrong and she told me that something was scraping against the side of the house and we needed to check it out. So we went downstairs to the basement, peered outside the sliding glass door, and discovered the cause of the scraping sounds. 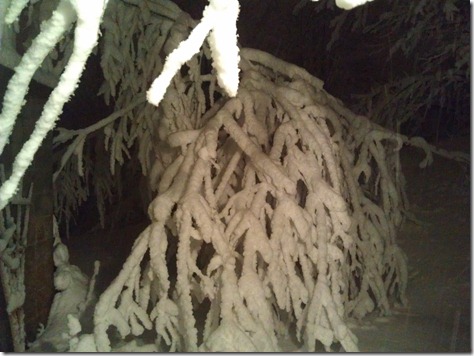 The tree branches were so weighed down from the snow that they were falling over against the house! 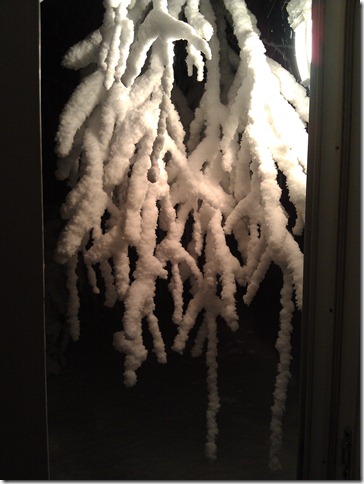 The one pictured above kept slowing sinking further and further down, and it was creepy! The branches kind of reminded us of tentacles or something so we tried to catch a video of the moving tree. Unfortunately, we didn’t catch any actual movement but I at one point I did jump about a foot in the air after being startled by some snow that fell off the branch. 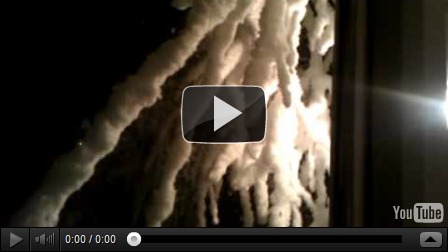 Eventually we got tired of looking at the creepy branches and decided to call it a night. I knew we’d get some more snow that night, but didn’t think too much of it since we all have four-wheel drive cars and snow tires. Well, turns out I had NO idea what was coming, because the next day I woke up to this: 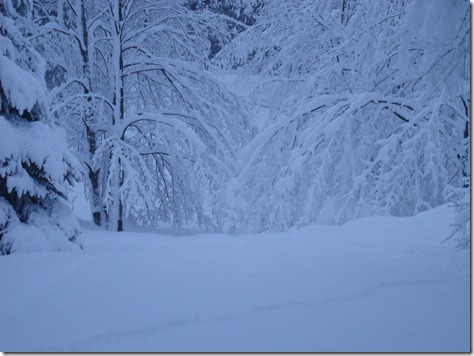 That would be my driveway. Completely buried under 24 inches of snow.

The rest of my yard looked pretty similar. 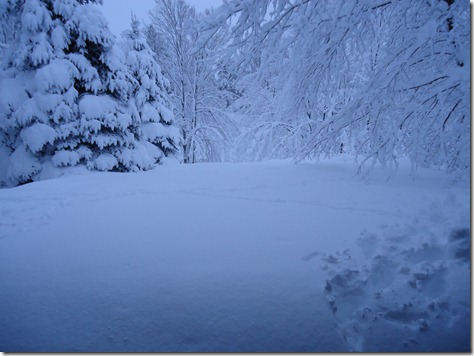 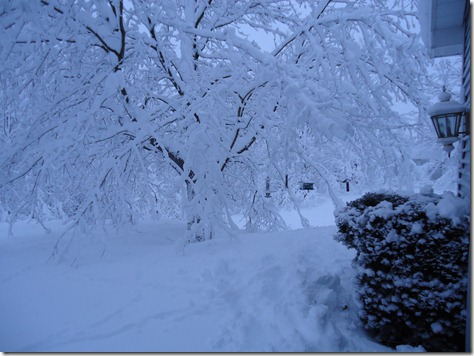 Check out my back deck! 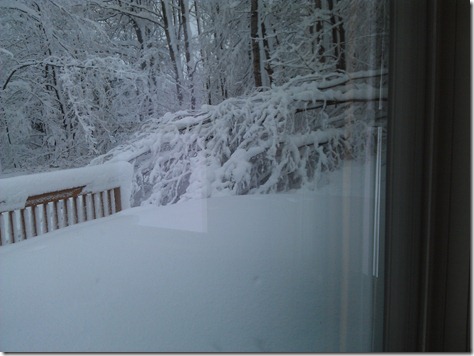 Since my dad was out of town this weekend, it was up to me to get to work on the driveway. I was scheduled to be working 9-7 and there was no way that any of us were going anywhere if our driveway didn’t get plowed! 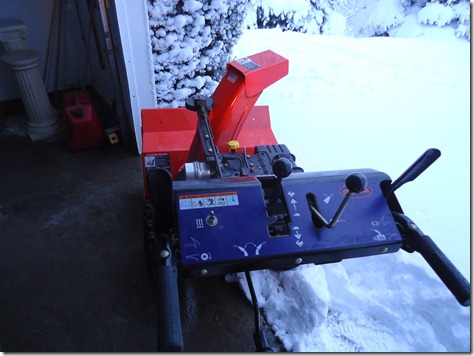 It’s been a while since I’ve used a snow blower so my sister had to give me a quick refresher over the phone. It wasn’t long before I got it up and running and started to tackle that driveway head on. 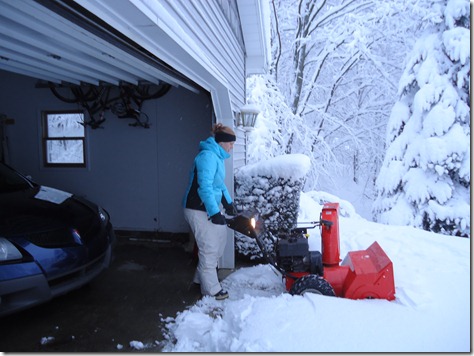 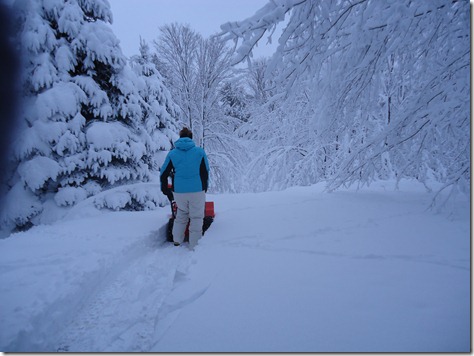 The snow was so wet and thick that I couldn’t really plow anything going up because the snow blower kept getting stuck. The only way I could get anything done was to plow going down the driveway, then just push the blower back up in the same spot and repeat. It took me forever. 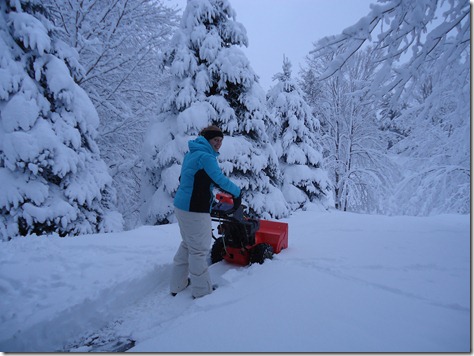 Finally after about 45 minutes, I managed to make enough a path for at least one car to get through. In case you didn’t notice, our driveway is really long and steep so I was pretty proud of that! 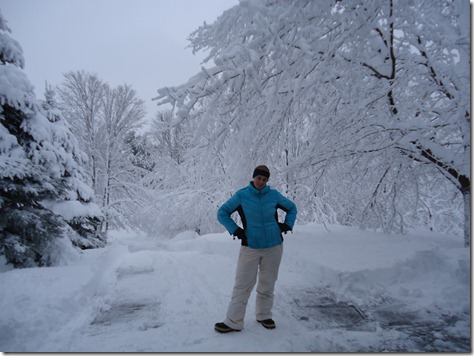 Side note: Snow blowing the driveway most definitely counts as a workout; it’s no joke! My arms felt like Jello all day yesterday.

After I finished all I could with the driveway, I headed inside warm up and eat some breakfast. I was absolutely starving! 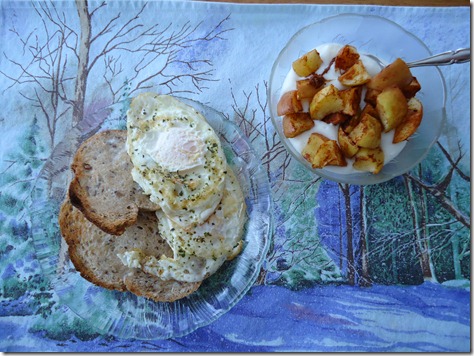 A healthy and hearty breakfast to fuel me up for a busy day, which consisted of eggs and toast 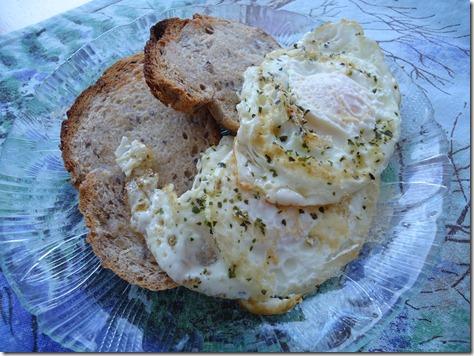 and yogurt with apple topping. 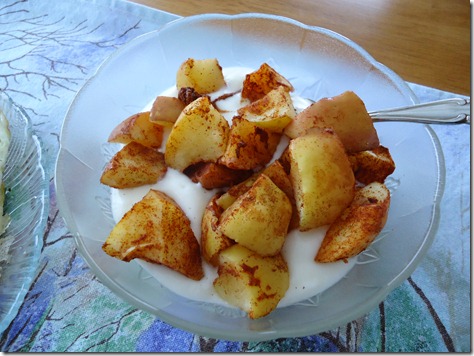 After breakfast I got ready for work and called my boss to tell him I was on my way. He said that he was the only one there and that all of the techs were snowed in, which definitely worried me. If I couldn’t make it to work either, then he would have to run the pharmacy by himself all day and there was absolutely no way that would work; we are way too busy for that!

Even though I only live about five minutes away from work, my mom offered to take me since her car is better in the snow and she’s never gotten stuck before and thought she’d be fine.

Well, she thought wrong. We made it out of our private road without much trouble, but almost immediately got stuck in our neighborhood. I called my boss and told him what was up and he actually ended up closing down the pharmacy and coming to pick me up. Thank goodness he has a truck! The neighbors helped get my mom’s car free and my boss and I headed back to the pharmacy. I couldn’t believe how many trees were covering the road on the way in. 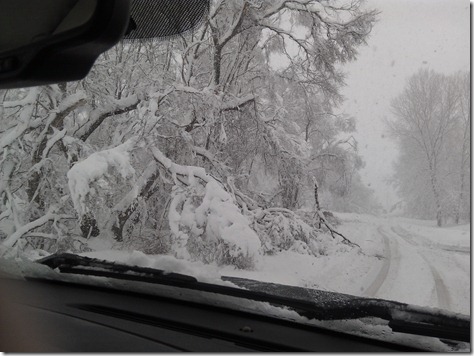 Talk about a crazy morning!

The day at work turned out alright, since most people were snowed in anyways. 75,000 people throughout the city were without power (luckily we were not!), and eventually Traverse City was deemed an area of “emergency” and the city only wanted cars out on the road if it was an emergency or they were emergency vehicles. Well, I sort of ended up having a little “emergency” of my own after I got home from work: the wireless card on my laptop died

. In my world, that truly is an emergency. I can’t function, nor can I get through my rotations, without the internet so my mom and I immediately ventured back into the storm to go to Best Buy. 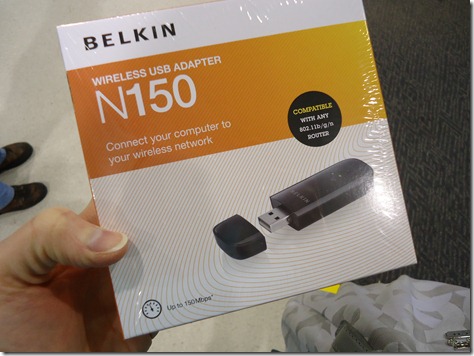 Say hello to my life saver. 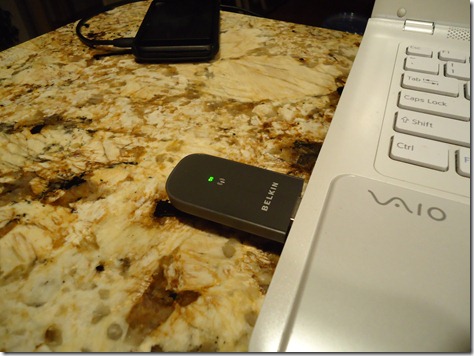 Okay, this post is getting way to long and I’ve got to get going to work. After work I have to drive back down to Grand Rapids since I have rotation tomorrow so my fingers are crossed that the roads are okay. Have a great day everyone and I’ll see ya tomorrow!

Anyone else hit with the Snowpocalypse?