Celebrating Eric’s Birthday and the Best Chocolate Cake Ever

I hope that everyone is having a wonderful weekend. Mine has been great! As much as it bothered me on Friday, I didn’t want to let the horrible weigh-in ruin my day or weekend, so I didn’t. Life goes on and it’s not the end of the world.

Eric arrived shortly after I got off of work on Friday and I did what any good hostess would do and put him straight to work in the kitchen. 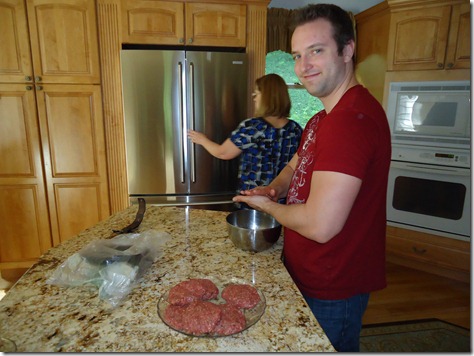 Haha, alright; that wasn’t actually the plan. The plan was for me to make the patties so my dad could grill up some burgers for the four of us (Eric + Me + my parents), but since I don’t have a clue when it comes to seasoning Eric ended up seasoning the meat for me and then just took over all together when I wasn’t making the patties “right.” Apparently I’m not a good meat masher/mixer and there was big hunks of pepper and other seasoning in the patties. I knew he was good for something

Thanks to his mixing and seasoning and my dad’s grilling, the final product turned out fantastic. 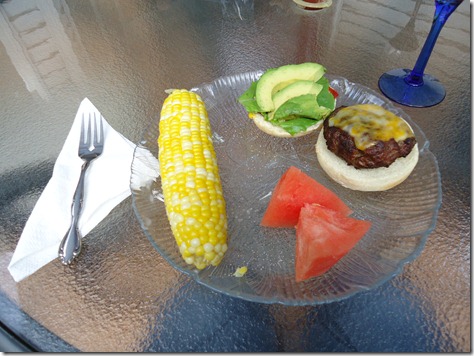 Burgers, corn on the cob, and watermelon. Does it get any more summertime than this, folks? 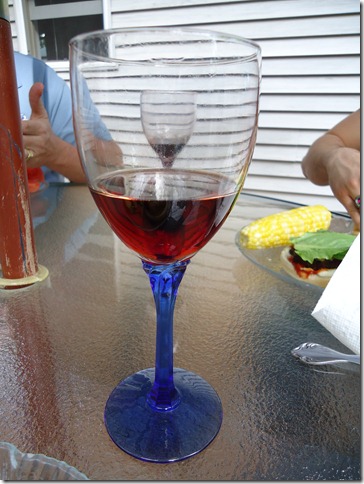 (Traverse Bay Cherry Wine Sangria for me and Merlot for him)

After clearing our plates and chit chatting for a bit, it was time for the best part of the meal… 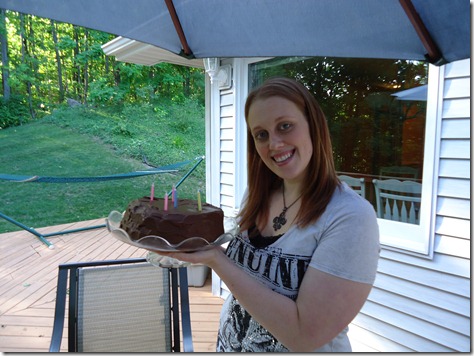 That cake was my masterpiece that I whipped up on Thursday night and as soon as Eric blew out his candles we all dove in. 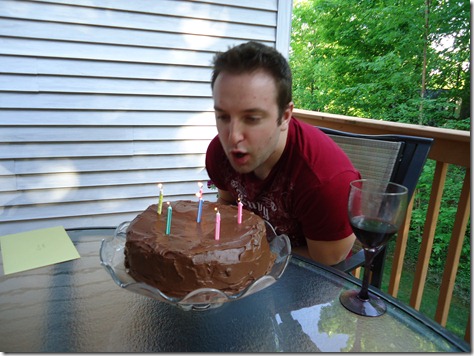 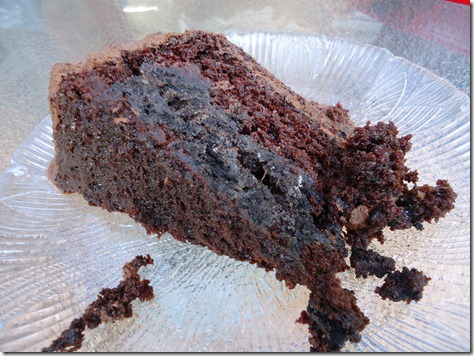 After a quick Google search on homemade ice cream cakes, I figured out that the crunchy layer he was talking about was really just crushed Oreo cookies and chocolate sauce, +/- a layer of fudge on top. I made my layer by crushing a package of Newman O’s “knock-off” Oreo’s (my mom is a food snob and hardly eats anything that’s not organic) and mixing the cookies with 1/2 cup of chocolate sauce (NOT fudge). Then I spread the mixture on top of half of the baked (and cooled) chocolate cake and put it in the freezer for about 15 minutes. 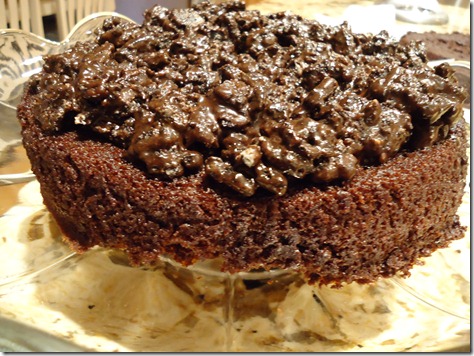 Then I topped it with the other half of the cake and frosted the whole outside. Not to toot my own horn, but this cake was seriously out of this world. Eric isn’t even a big fan of cake – or sweets in general – but I knew it was good when he said it was one of the best cakes he had ever had. Everyone gave it two thumbs up!

), but those got pushed back because of the cold and dreary weather. Instead, we went to Bubba’s for lunch 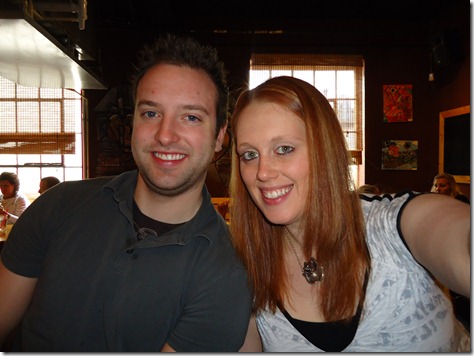 and spent the afternoon moseying around the shops downtown. 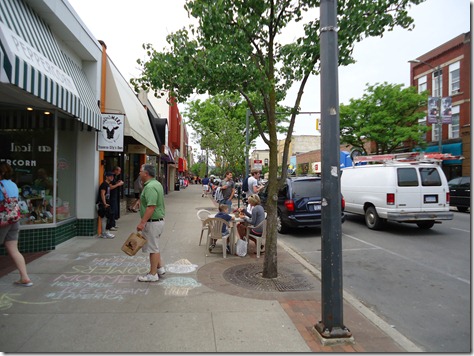 We also managed to catch a late matinee before coming home to get ready for the rest of our evening.

It began with dinner at Red Mesa Grill, an excellent restaurant here in Traverse City that has an impressive tequila bar. 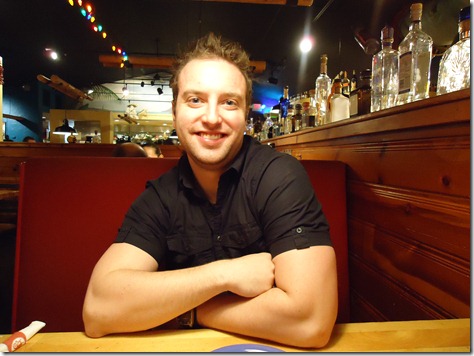 Of course I took advantage of that and ordered a margarita, along with the mango cashew chicken salad for my main meal. Home girl needed some veggies! 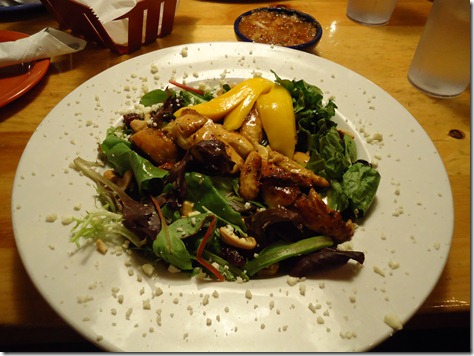 (FYI, this is on my list of Top 3 Favorite Restaurant Salads. It’s SO good.)

We capped off the night with a little bar hopping with some friends. 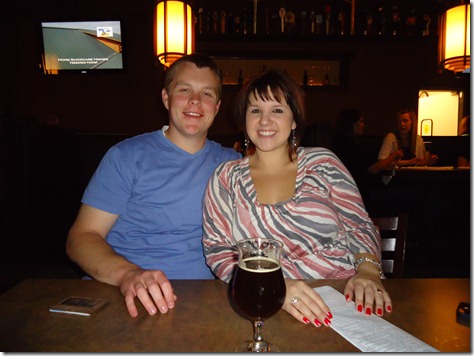 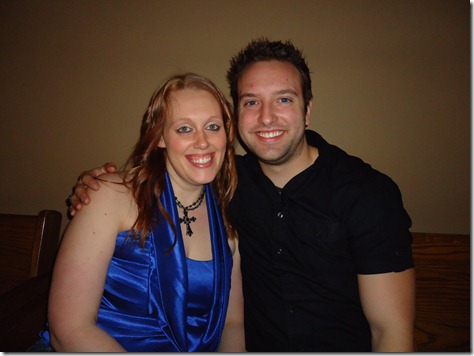 Brad and Elena gave us a ride home and after telling them about the amazing cake that I had made, they decided that they had to try it. So, at 2:30 am we raided my parents’ kitchen and demolished the last piece of cake in about ten seconds flat. 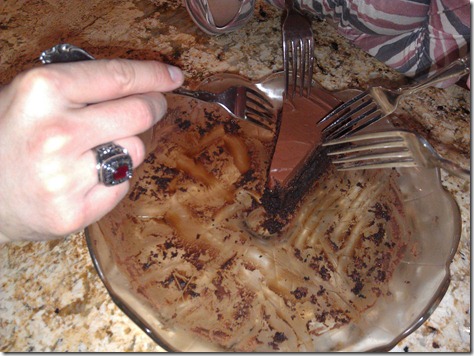 It was a great night

Once again on Sunday, the rain destroyed any chance we had of going kayaking so we kept things pretty low key. After a busy week and a fairly busy weekend it was nice to just chill at the house. Eric left early this morning and shortly after that I took my new road bike out on my first “real” ride! I’ll share the details tomorrow

Enjoy the rest of your day!