Thank you all so much for your congratulations this morning; both on the post and on the Facebook page! My first day on the job was insanely busy – the next two weeks are the busiest weeks of the entire year at the store here in Traverse City. There are still some technicalities regarding my status change that need to be taken care of, but overall things went well at work! My parents also had a little treat waiting when I got home: 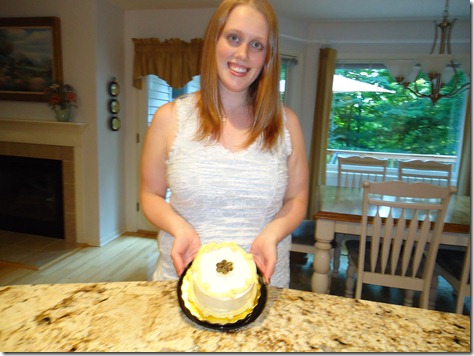 Alright, enough about me. Let’s backtrack to Saturday – which was all about Melissa! 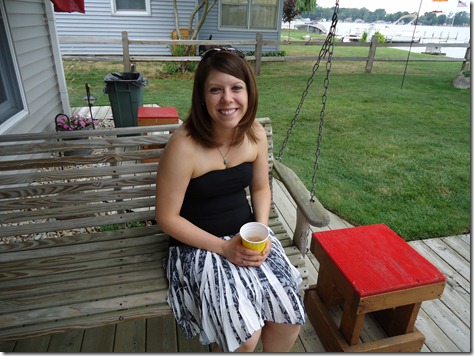 (Still can’t believe my girl is getting married in less than four weeks. I’m so happy for her!)

Before Saturday I had never planned a bridal shower OR a bachelorette party, so having them both on the same day was a little hectic. Everything went off without a hitch though and I think that Melissa had a great time! The reason that I planned them on the same day is because most of the people who went to the parties are from all over the state, and it just seemed easier to only make everyone drive once.

First up was the bridal shower, which was held at Nick’s (her fiancé) parents’ house on Gun Lake in Shelbyville, MI. 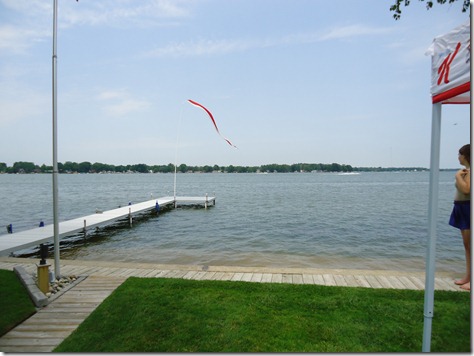 It was HOT outside, but it was worth it to have such a pretty view of the lake and gorgeous scenery during the party. 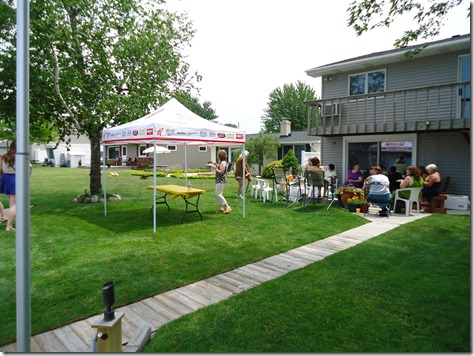 Nick’s mom, Melinda, and Melissa’s mom, Patty, both helped me with the shower and I was so grateful for that. I set the date, mailed out the invitations, and planned the games and activities of the shower, while Melinda took care of all of the food and Patty was in charge of dessert and party favors. I most definitely could not have put on the shower without the help of those wonderful ladies!

First up on the agenda was a “How Well Do You Know the Bride” quiz. I found some generic questions on this website and retyped them onto a Word document. 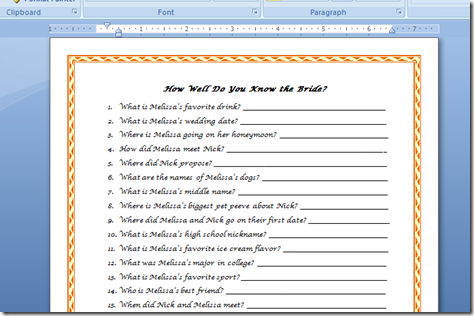 As guests arrived at the party, I gave them each a quiz to fill out as they got settled and mingled with the other guests. About twenty minutes into the shower, I gathered everyone together and Melissa went over the answers to the questions. 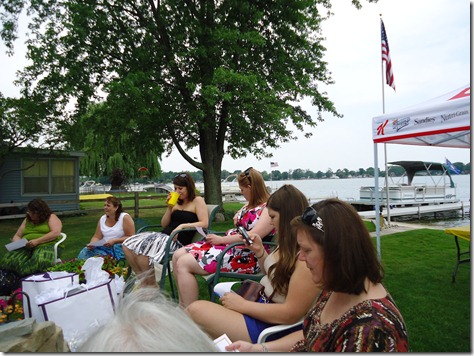 The person with the most correct answers won a prize, which was a cute hummingbird table that Patty picked up at the store.

After the quiz it was time for food! 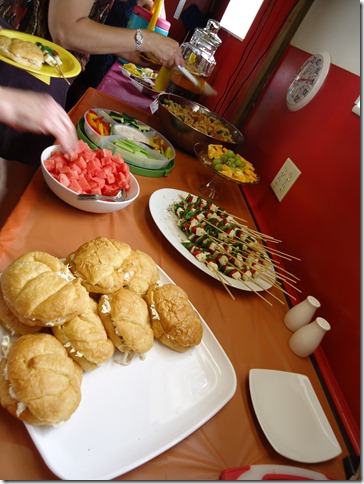 Melinda set up a delicious buffet with chicken salad sandwiches, mini caprice salad kabobs, fruit, veggies, cheese, and pasta salad; plus mixed nuts and homemade sangria that we enjoyed while working on our quizzes. 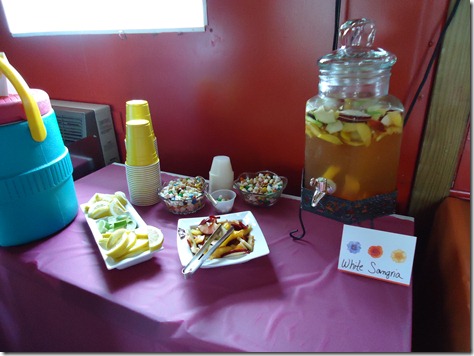 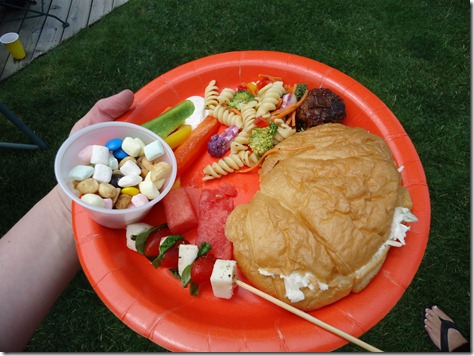 After lunch it was time for the next activity! Last week, I recorded a Skype conversation with Nick where I asked him a bunch of questions about Melissa and their relationship. Then at the shower, I asked Melissa each question and after she answered, I played Nick’s response on my computer. 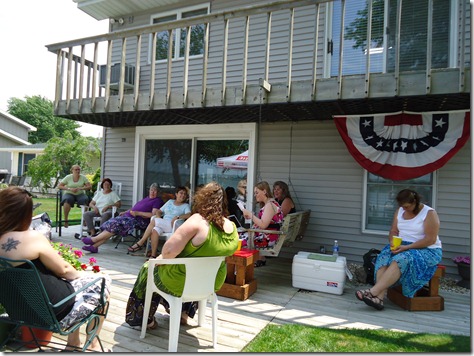 It was fun and everyone seemed to enjoy listening to both of their answers. I would definitely do something like this again at another shower, but I probably wouldn’t use the same questions. These were a little too generic and I like quizzes that are a little more personable and funny.

Next up Melissa worked her way through her huge pile of gifts. 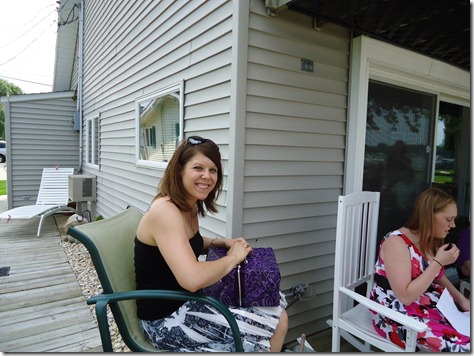 This is when I really started to get warm. Running around in 95 degree heat handing her presents and trying to write down everything she got was more challenging than it sounds!

I must say I was quite jealous of all her new kitchen stuff. I think she should just give her duplicates to me 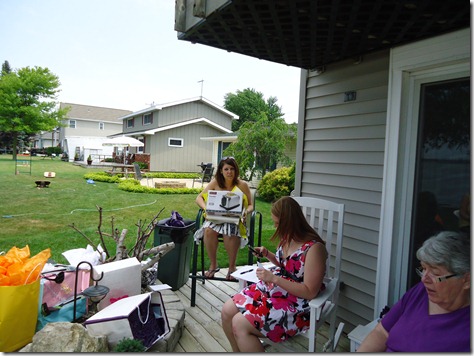 When she finished opening presents we all enjoyed homemade strawberry rhubarb pie and ice cream (made by Patty – delicious!!) and then it was time to wrap things up. We made sure to give everyone a gift basket as they headed home. Aren’t these the cutest party favors?! 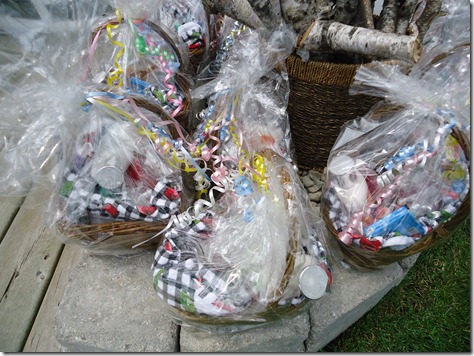 Each basket had lotion, a mini manicure kit, jelly beans, chocolate covered cherries, a candle, gum, and a hand towel. It was so nice of Patty to put these together!

I’m glad that Melissa had a good time at the shower. She hates having so much attention on her, so I think she was a little relieved when it was over 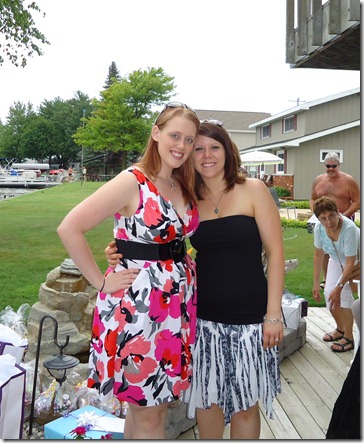