Hello and Happy Monday! I hope everyone had a great weekend. I fully intended on preparing a blog post for Friday, but I got tied up on Thursday night and didn’t have time before I left for work on Friday morning. One of the items on my agenda on Thursday included an appointment to get my hair done, so I’m now sporting some new highlights and lowlights. My mom got me a gift card to the salon for my birthday and it paid for almost the whole thing. Score! 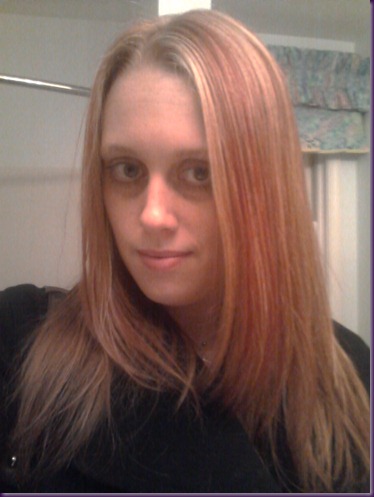 I love the way my stylist cut it, too. My hair was in desperate need of a trim!

I worked the opening shift on Friday and after work, I came home and packed before high tailing it down to Lansing for a weekend with my guy! 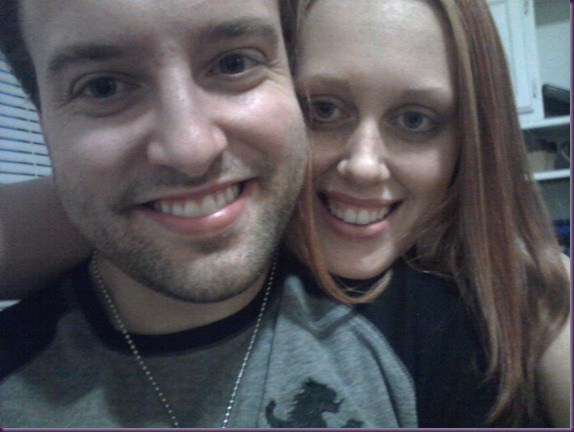 We had a relaxing and low key weekend and spent a lot of time chilling at his apartment making our way through Season 2 of Smallville. We did, however, have a productive morning on Saturday! We woke up bright and early to get in a quick workout before heading to Eric’s eye appointment. Eric has a handful of exercise equipment and set up a little “home gym” right in his basement. He does a lot of crossfit-like workouts, so this set up works great for him and saves loads on a gym membership. 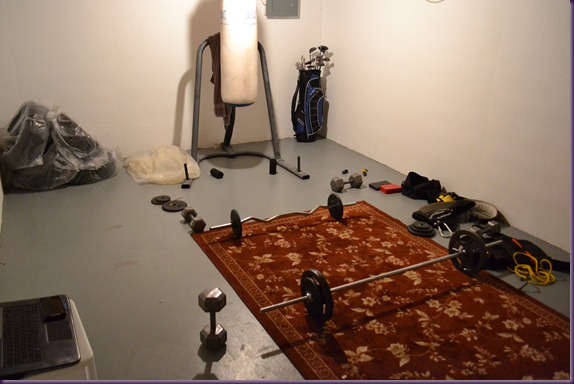 I don’t know much about crossfit – just what I’ve learned from Eric and read on other blogs – but I do know the basic concept and a lot of the basic moves. The workouts are mostly strength based, but they are timed so you get a good cardio workout in too because you are moving quickly. Usually, Eric checks the crossfit website and looks at the posted WOD (workout of the day) and then adapts it so that he can do something similar in his basement gym. Our WOD on Saturday consisted of doing as many rounds as possible (AMRAP) of the following circuit in 12 minutes:

Here's a video demonstrating a crossfit clean, but I obviously used way less weight than that. These are terrible pictures, but here I am doing a clean using my little baby barbell. 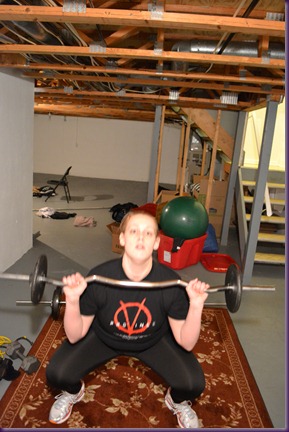 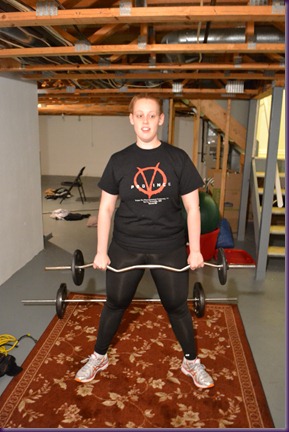 Not exactly the most flattering pictures, but they were the least blurry out of all the ones taken.

For the kettle ball swings, we improvised and used dumbbells. 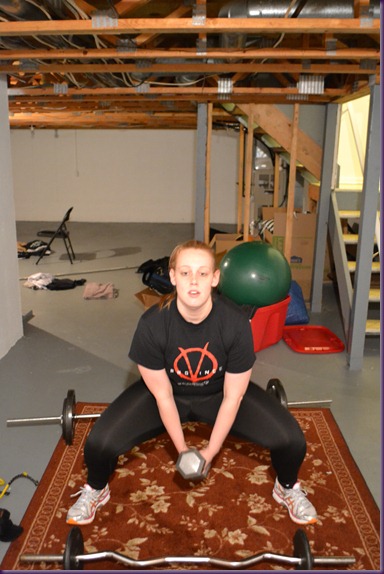 I ended up doing five rounds in the 12 minutes, and I was exhausted when I was done! 12 minutes doesn’t sound like a long workout, but that’s an intense 12 minutes. My legs are still sore this morning, which probably won’t fare well for my leg workout that I have scheduled for later this afternoon!

After our workout on Saturday, we headed out to run a few errands (I had a ridiculously good time at Eric’s eye appointment – I finally convinced him to get some black-rimmed glasses

). We grabbed Subway for lunch and then spent a few hours lounging and watching Smallville before getting started on dinner. It was Roath Wild Wings night! 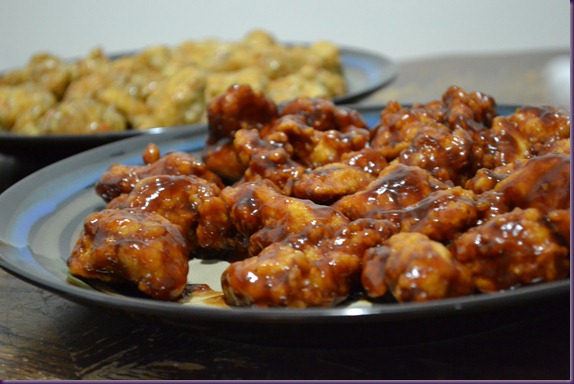 It has been a long time since we’ve made wings, so last night we invited our friend Brad over to enjoy a couple beers, some homemade wings, and a fun night with hilarious conversation. 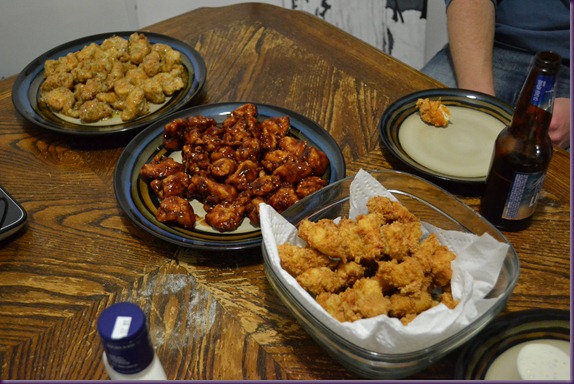 These wings are so unhealthy, but they are definitely worth the splurge once in a while. Eric used to fry them on the stove, but a couple years ago he received a deep fryer for Christmas which takes these wings to a whole new level. To make them, he cuts the chicken into medium sized pieces, dips them in egg, and then coats them in a seasoned flour mixture. He then fries the wings before covering them in different sauces and finishing them up on the stove top. From left to right in the above photo, we have parmesan garlic (made using the parmesan garlic sauce from Buffalo Wild Wings), honey barbeque, and plain chicken tenders. 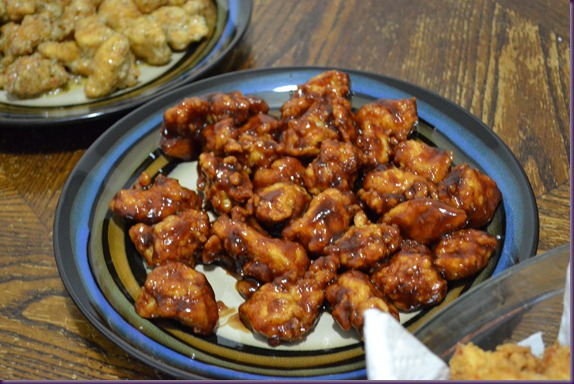 My favorite are the honey barbeque, but I was also a fan of the plain chicken tenders. 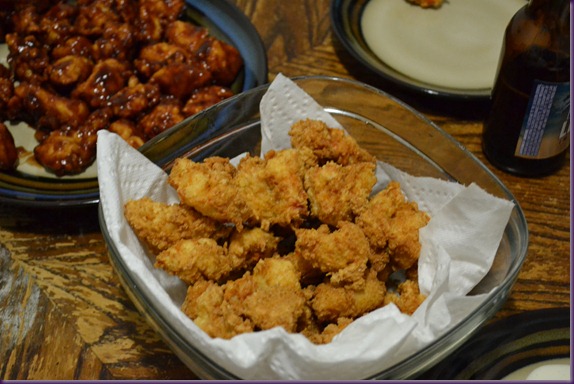 Here’s my plate with some of everything: 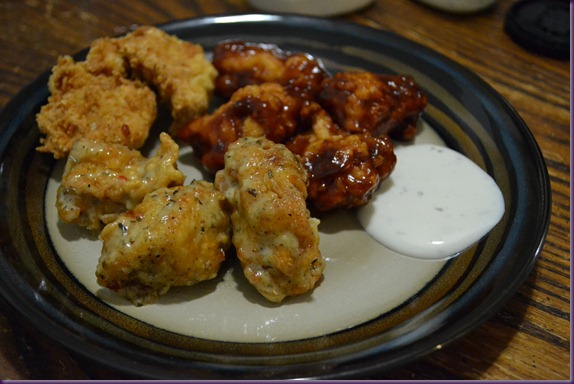 So delicious, and so much cheaper than going out and spending the money on wings at a restaurant. Plus, Eric’s are way better

I’m off to work, but I have a workout on the agenda for this afternoon and then a trip to the grocery store is in order. I want to bust out my new crock pot this week so if you have any recipe recommendations, please let me know!