Okay, is this not THE cutest picture you have ever seen in your life? 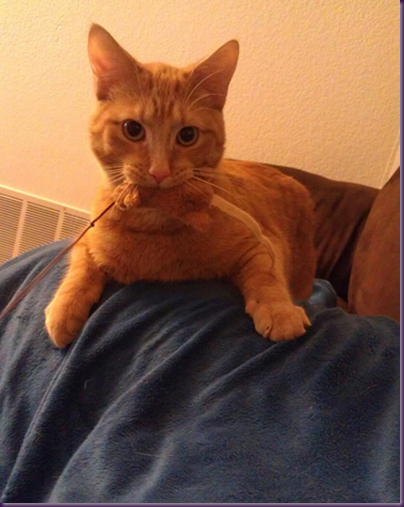 I spammed my Facebook, Twitter and Instagram (username = healthyberg) with this picture last night – I just can’t get enough of it. Every time I see it I bust out laughing because he is just so darn cute. He is totally in prime play mode and has that whole innocence thing going on. I love it!

I’m not sure why, but it seems like Mikey has been extra cuddly lately. 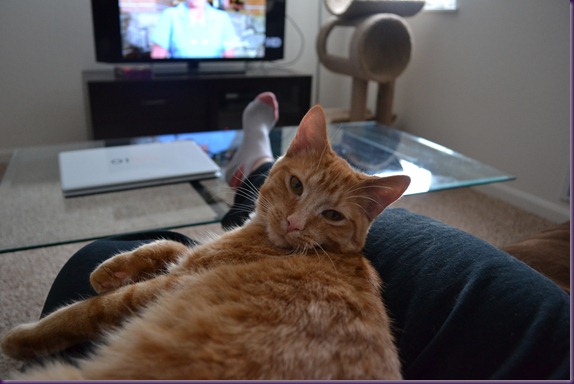 I’m always sending pictures of him to Eric. He says I’m such a cat lady but I don’t care. I think I’d do the same thing with any pet! I love dogs too but I can’t have one right now at my apartment. I guarantee that if I ever get one you’ll see pictures of that pet plastered all over the blog as well

While Mikey and I were lounging around this morning, I enjoyed this beautiful breakfast. 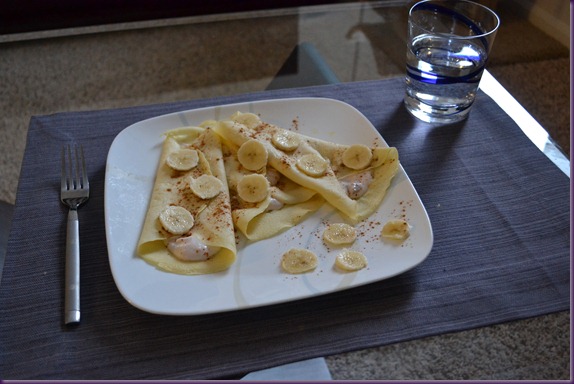 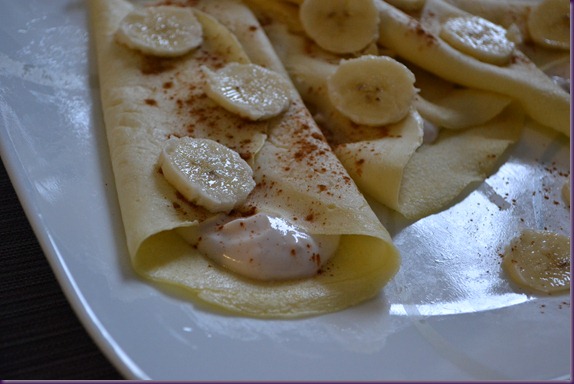 I feel like I’ve been in a bit of a breakfast rut lately (I pretty much eat eggs and toast every single day) so the last couple days I’ve been trying to switch it up. I’ve had some extra time in the mornings so I’ve taken advantage of it and made some really delicious meals. 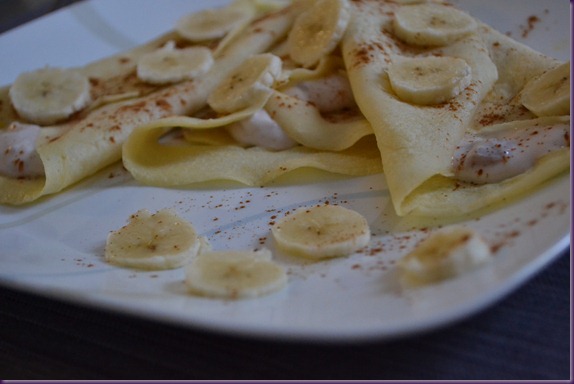 To make the crepes, I follow this tried and true recipe that only has three ingredients (I think it’s based off of a recipe that I found on Fitnessista):

You can also add a sweetener of choice, but I forgot it this time. In the past I have added a small packet of Stevia and it really makes a difference in the taste – I think I prefer it with the Stevia. Anyway, I put all the ingredients in a blender and blend until smooth. Then I pour 1/4 cup batter onto a greased, nonstick pan and cook like a pancake. You can use whatever fillings and toppings you want, but for this particular batch I filled each crepe with strawberry banana Greek yogurt and topped them all with a sprinkle of cinnamon and banana slices. Delicious!

The recipe is supposed to make three crepes, but for some reason I only got about two and a half out of this batch. I didn’t have enough batter left to cover the pan when I got to the last one, so the result was an interesting looking crepe. 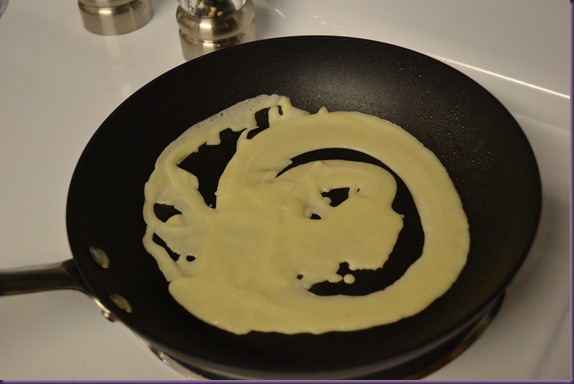 Ha. Can you tell that I tried to hide it in between the two good looking crepes? 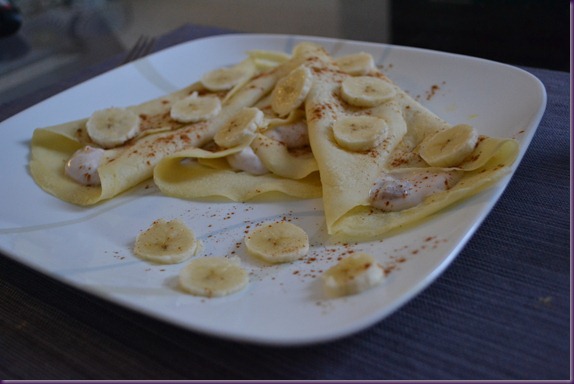 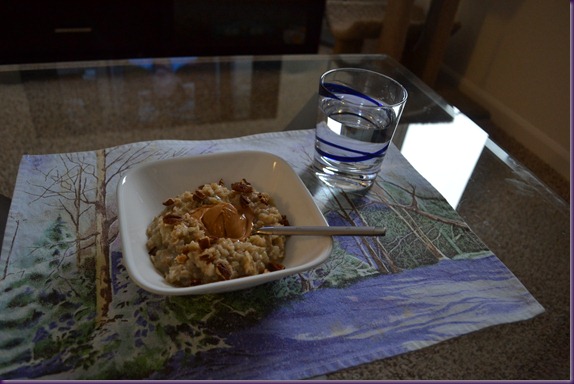 I cooked 1/2 cup oatmeal in one cup of water along with 1/2 sliced banana whipped right into the oats. When they were done cooking, I topped the oats with a small handful of chopped pecans (I like a little crunch and they were the only nuts I had in the house) and a spoonful of peanut butter. 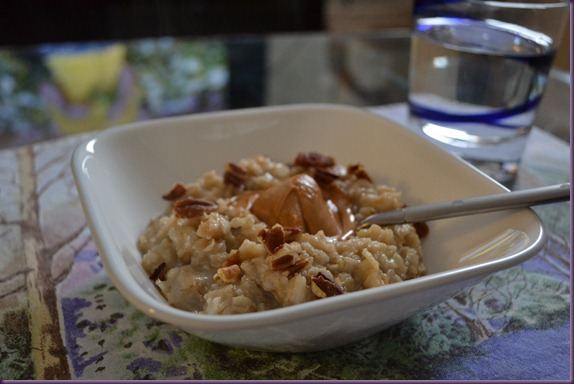 This breakfast is SO filling. I didn’t get hungry for hours, and that’s pretty rare! 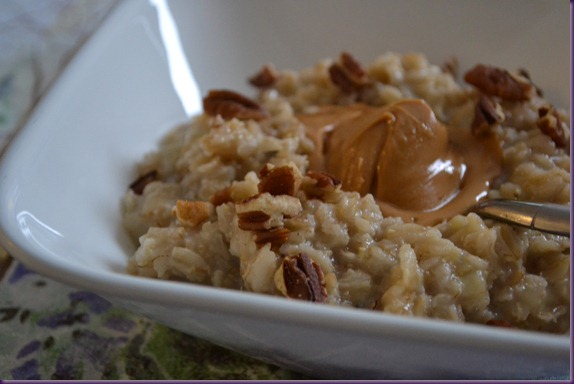 If you cook the oats in water, it’s got decent stats too. With 1.5 tablespoons of peanut butter, it still comes in at under 400 calories. Win!

Speaking of calories, my calorie counting has not exactly been stellar this past week. Last week (ironically after I posted my weight loss update post) I actually gained two pounds, and this week it stayed the same. Not exactly what I was going for

. No one to blame but myself though, and I KNOW I will have a loss next week. I’m thinking about signing up for Diet Bet for a little extra motivation. I first read about it on Mindy’s blog, and it seems pretty cool. Basically, you pay to join a bet (average bet costs about $25.00) and then you post your starting and ending weight. You have 4 weeks to lose 4% of your body weight, and whoever hits the goal at the end of the bet splits the pot of money. If you don’t hit your goal, then you just lose whatever money you put in. Pretty neat idea! Have any of you guys done this or something like it? What did you think?

Edited to Add: I ended up signing up for a DietBet shortly after this post went up this morning! If you want to do it with me, I joined the From Fat to Fit Challenge, which costs $20. Be sure to sign up quick because the initial weigh-in is tomorrow! Let me know if you decide to sign up; we can keep each other motivated on the blog

Today I don’t have to into work until later this afternoon, so I’m going to hit up a lunch time cycling class. Eric is coming up tonight and his parents are actually going to be in town this weekend, too! It’s actually my weekend to work but I managed to get the last bit of my Saturday shift as well as all of my Sunday shift covered so I can hang out with them. Should be a blast!

Have a great weekend!