It’s been a while since I’ve talked about Mikey on the blog, so I thought it was time for an update! For the most part, the Purr Monster is doing well. He’s mellowed out a little and is doing a little better at night. He’s actually slept in my room all night a couple of times in the past two weeks, which is a huge improvement. Typically he runs around all night and keeps me up so I end up kicking him out around 1:00 or 2:00 in the morning. He usually wants attention when I come home from work, but I’ve been pretty good about playing with him while I’m relaxing on the couch or talking on the phone. He has a new favorite day that hangs from a string, so I can just drag it around the apartment while I’m walking back and forth and he is completely happy and entertained.

Today I want to share some photos from yesterday afternoon – it was his first play date! I know it seems weird to organize a play date for cats, but I swear I have a good reason. In a few weeks I’ll be leaving to go on a trip to Los Angeles. Eric and I are attending a pharmacy conference there and I’m SO excited, but I’m not sure what I’m going to do with Mikey yet. My parents usually watch him when I go out of town (they stop by twice a day to check on him and feed him), but I don’t really want to leave him by himself for a week. He is way too needy to be left alone that long – he will seriously go nuts. Plus, I feel bad asking my mom to come over twice a day for longer than a couple days. I can’t leave him at my parent's’ house because they have two cats of their own who don’t really get along with other cats, and I don’t want to board him. The thought of kenneling Michael just makes my heart break. 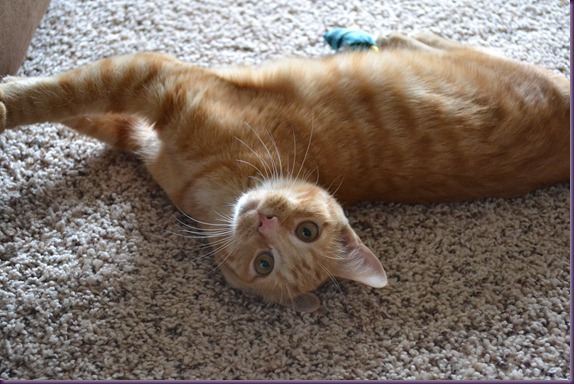 Anyway, my friend Melissa who lives in town has three cats of her own who all get along pretty well and she absolutely adores Mikey. She met him a few weeks ago and we’ve been trying to organize a play date for him to meet her cats ever since. We figured that if they all got along for the most part, then I could just leave him at her house when I go on my trip. That way he’s not alone and he’ll (hopefully) have other cats to play with. Well, yesterday was finally the day to bring him over.

The first thing he noticed was definitely how big her house was. Compared to my apartment, he probably thought her place was a mansion! He was also introduced to stairs for the first time. 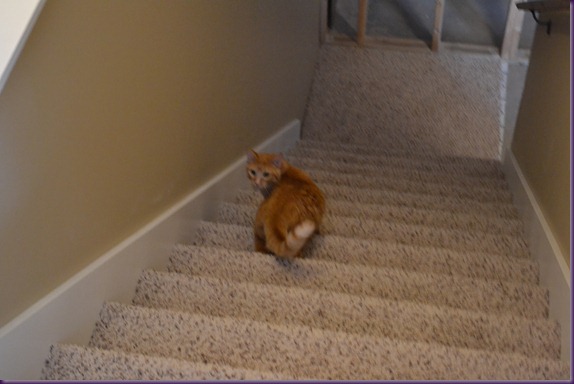 After letting him explore for a while, we brought her cats out one at a time to meet him. 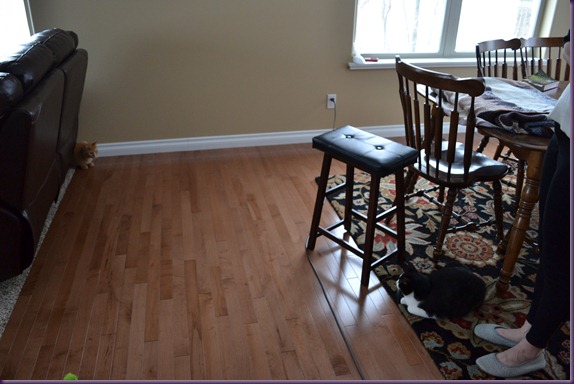 Her cats all hissed at him at first, and poor Mikey just sat there cowering like a helpless child. He is completely submissive and makes absolutely no attempt to defend himself. Whenever one of the other cats would hiss or stare intently at him, he would just flatten his ears, lean back into me, and look at them like, “what are you doing that for?” Poor guy! 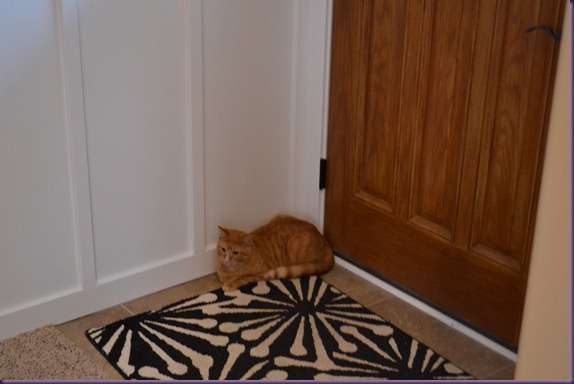 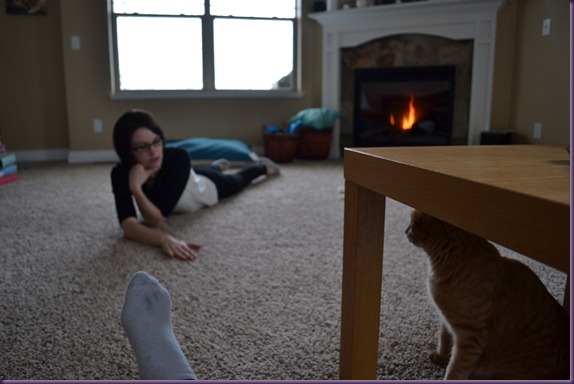 Eventually we felt comfortable enough to let all of the cats out at once, and I think her cats eventually got bored with inspecting their new house guest. Mikey also discovered her humidifier and seemed to find comfort in that. He pretty much camped out on that end table for most of the afternoon/evening while eyeing the other kitties. 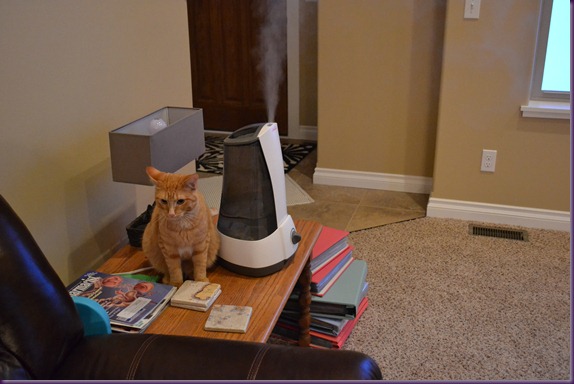 Meanwhile, Melissa cooked up some awesome homemade chicken noodle soup for us to eat for dinner. 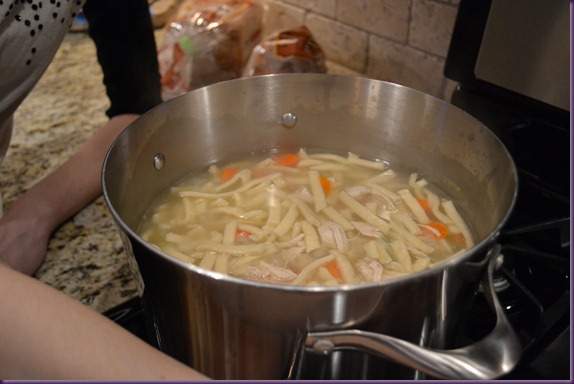 It was yummy! I had two bowls. 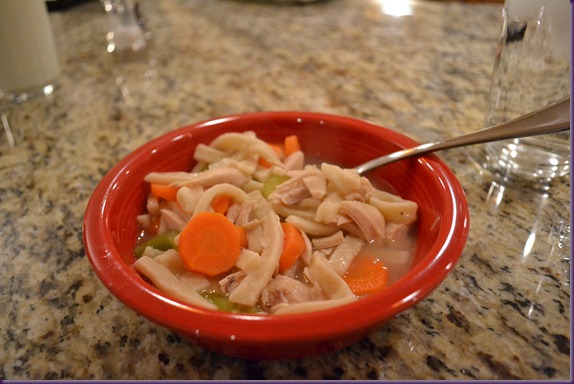 Overall, I was somewhat satisfied with the encounter. It didn’t go quite as well as I had hoped – I had visions of “love at first meow” – but at least they didn’t seem to hate each other. I’ve had some horrible experiences with my parents’ cats and I really am happy that nobody attacked each other yesterday. I still am not positive if I’m going to leave Mikey at Melissa’s place while I’m on vacation, but we will probably try another play date between now and then and see how it goes a second time around.

After we got home, Mike ate dinner and then pretty much crashed. It was a stressful afternoon for my little guy. Ya know, today made me realize how protective I am over my kitty. Every time we had the other cats near him, I was right there protecting him and making sure nothing went wrong. That’s part of the reason why I don’t have very many pictures of all of the cats together; I was too busy watching Mikey! When he got scared I picked him up to tell him that it was okay and pet him until he calmed down, and I felt like I couldn’t relax the entire time I was over at Melissa’s because I was worried about him. He really is like a child to me, and as much of a pain as he is sometimes I would be devastated if anything ever happened to him. Pets play such an important role in our lives – they really are like members of the family! 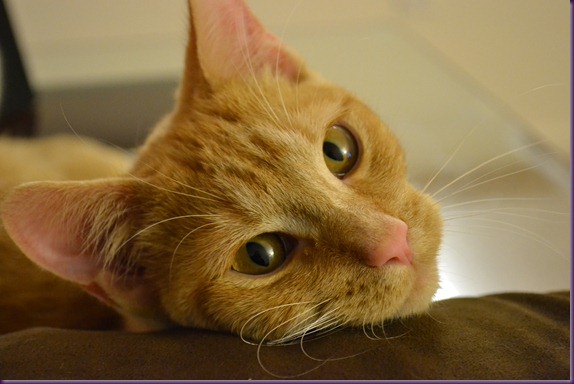