An Update on Mikey (and Me) 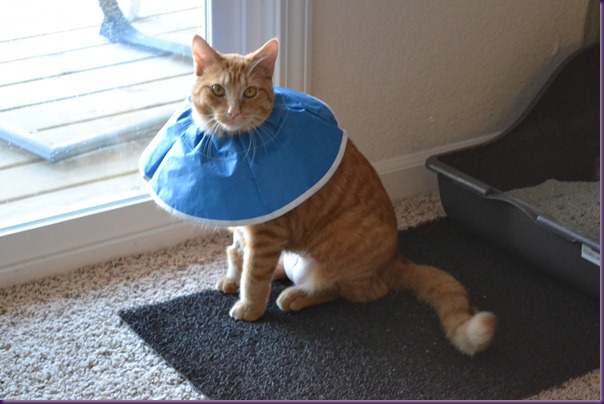 Okay, let’s back track a little. I have lots to catch you guys up on!

First of all, I wanted to thank all of you for the well wishes for Mikey. It was really nice reading your comments and it feels good to know you care! He went in for surgery on Monday morning and the vet did end up finding something balled up in his small intestine that was causing a blockage. It explained Mikey’s lack of appetite because there was nowhere for the food to go. Here’s what she found: 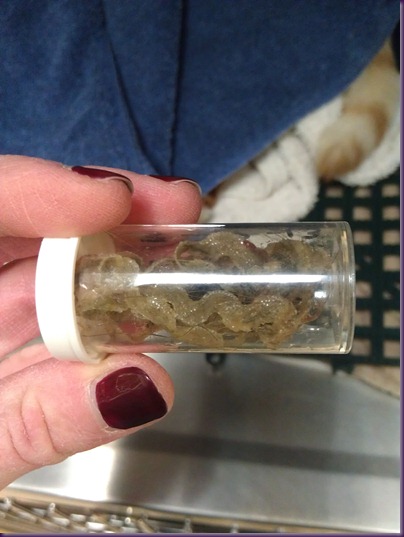 At first we had no idea what it was, but after looking closer I realized that it’s actually a piece of one of his Christmas toys. It’s a long ribbon-like string and I seriously cannot believe that he swallowed that whole thing. It had to be ten inches long! Oddly enough, I can’t find the toy anywhere. I’m not sure if he hid it somewhere in my apartment, or if that piece of toy has been sitting in his tummy since Christmas time!

He had a to stay at the vet’s overnight, so I stopped by to visit him a couple times before picking him up yesterday afternoon. Here he is shortly after waking up from surgery. You can tell that he’s still pretty groggy! 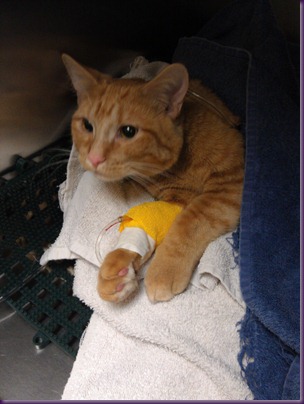 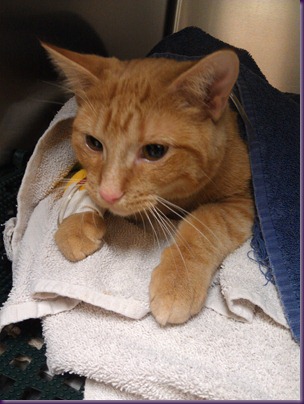 He was feeling much better when I came in to see him yesterday morning. Still a little sleepy though. 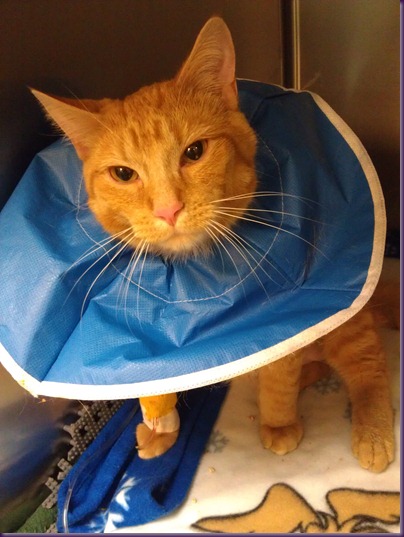 “Mom, why you takes pictures?”

Poor guy had to wear a big cone on his head so he didn’t chew his IV. You could tell he was so uncomfortable. Luckily he perked up a lot when I stopped by and he even ate quite a bit of his breakfast. 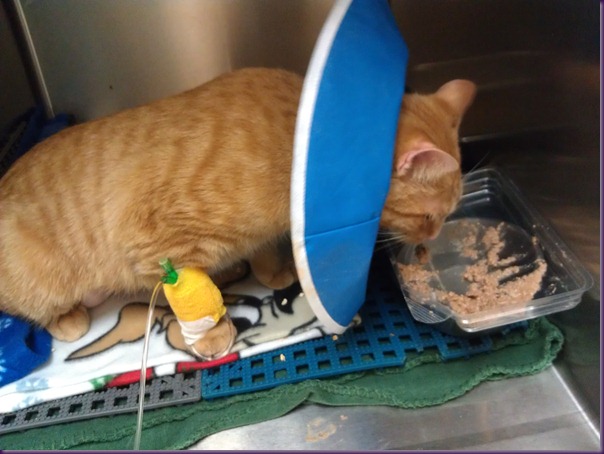 The vet kept him around for most of the day yesterday to make sure he didn’t vomit again, and then she called me in the afternoon to let me know that he could come home! He was pretty stoked. 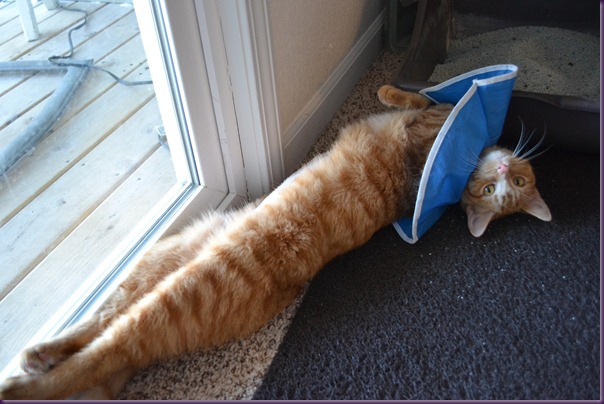 As you can see, he still needs to wear that cone on his head. He has a huge incision on his belly that is stapled shut and without the cone, he licks and chews on his staples and tries to pull them out. He totally hates it and has trouble walking around, jumping, and sleeping, but the LAST thing I need is for him to not only give himself an infection, but to eat a staple! 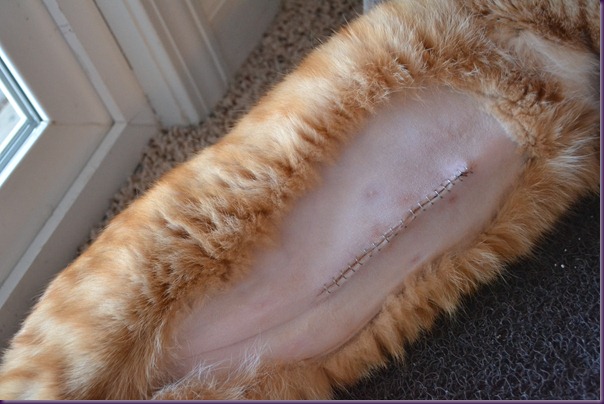 I know I need to take a chill pill, but I am still so worried about him. I’m worried he’s going to slip his cone off while I’m gone (he did it once at the vet’s already), but I’m also worried he’s going to trip over himself while he has it on. Sometimes he slips and I can’t keep him from jumping when I’m gone and it just has me all stressed out. Last night I let him sleep in my room and he kept me up ALL night. He kept getting up and moving around and his darn cone is so loud. It disturbed me all night. I felt too bad and was too worried to kick him out though. He has to have his staples in for at least ten days; I’m not sure if I can deal with this for that long!

I have to say, it really has been a rough couple of weeks for me and I’m physically and emotionally exhausted. When I got home from LA, my dad and my sister were both in and out of the hospital for various reasons (everyone is fine – my dad had a slight complication from a medical procedure and my sister was violently ill with the stomach flu), then I got the stomach flu and had to miss work, then this whole ordeal with Mikey happened. I’m still not completely over the flu, I haven’t had any appetite, and I haven’t been sleeping. Work has been stressful and I’ve had to work the late shift almost every day this week. On top of everything, I’m really missing Eric right now and I won’t get to see him until next weekend. I know in the grand scheme of things life could be a lot worse, but I’m just really ready for my life to get back to normal. I’m ready to start eating and working out again, get some sleep, and I want Mikey to get better. Okay – end sob story.

Well, there ya go. A Mikey update and a little insight into my mind lately. I’ll try to limit the drama to just this post